Gravel trucks and tractor trailers and the companies that put them on the road, continue to torment drivers on Utah’s roads. According to KSL News, increased construction in Eagle Mountain, particularly along SR73, has led to a marked increase in the number of cars damaged by companies that are not taking precautions to protect others from rocks falling off their trucks.

According to UHP spokesman Jeff Toney: “These guys are going from sunup to sundown, and sometimes seven days a week.” And complaints from motorists have likewise increased, says Toney. 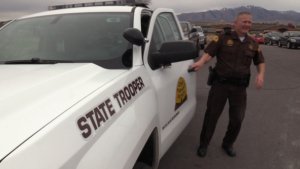 The UHP is charged with enforcing the Utah law that requires companies to secure loads. According to Toney, a truck is hauling a load illegally if you can see the rock over the top of the truck. When you can see the rock product, the company is required to put a tarp over the load to prevent it from falling off onto the road. Most trucks are following the law, but there are times when too much rock product is loaded and the driver is going to fast leaving the yard and from location to location, Toney says.

Legally speaking, gravel truck companies are required to keep their rock products, including sand, from falling or blowing out of their trucks. So even if you cannot see the product from down below, if it’s blowing out, falling out of the bottom or back end of the truck, then the company is not being careful enough about preventing damage to the motoring public. Unfortunately, the companies seem to just want to do the bare minimum. And even then, some are reluctant to do even that. This is sad as it’s the motoring public that gets hit in the pocketbook. It’s only the windshield replacement companies and paint shops that are scoring when gravel trucks prematurely age and damage our cars.

Obviously, if you see a truck in front of you spewing gravel or sand, you should keep your distance. Once when I was driving down the freeway and started to hear the tell-tale pitter-patter sound on my windshield of a gravel truck spreading its load of sand ahead of me, I slowed down so my windshield would be pitted less. However, I couldn’t slow down enough as two gravel trucks in the next 1-2 minutes then passed me! Honestly, you can’t seem to get away from them!

Bottom line, if your windshield and/or paint job was damaged due to rock or sand from a gravel truck, then you probably have a claim against that company unless you were tailgating them. I talked earlier about what you need to do to make such a claim. Click here to see that article. Sadly, it’s only when someone holds the gravel truck companies responsible and hits them in their pocket book that they will begin to change their ways.

Ron Kramer is a personal injury attorney practicing law in West Jordan and throughout Utah state.