The law has been on the books in Utah since 2008, but apparently few know that it’s illegal to camp out in the fast lane when surrounding traffic is traveling faster than you are. 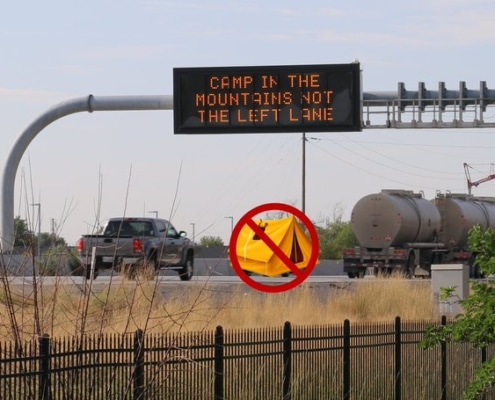 Recognizing that left lane loafers can be a hazard to surrounding traffic, Utah’s DOT is on a campaign to get the word out. According to a story in KSL News, the DOT is starting a public awareness program to encourage these offenders to either speed up or to move out of the left-most, non HOV lane.

The problem with left lane loafers is that faster-driving motorists will attempt to pass to the right of the slower driver — even though this is prohibited by the above law – and in doing so, will increase the risk that a collision will occur. (According to the DOT, over 21% of all accidents happen from changing lanes.) Other accidents can occur from left lane slow pokes, such as rear end collisions, when the approaching driver doesn’t realize the driver is going at a much slower speed, or might be stopped!

All told, motorists traveling slowly in the left lane reduce the safety of our roadways and, legally speaking, could potentially be responsible if a crash happens because of their actions, whether inadvertent or not. I think this is particularly true when a self-righteous left lane loafer plays the role of a traffic cop and goes at or below the speed limit to help teach others to “obey, honor and sustain the law.” Although Utah drivers are required to exercise reasonable care when they drive, those that contribute to a crash by inciting others to be inpatient and take more risks than they would normally take, may not be blameless when it comes time to apportion fault.