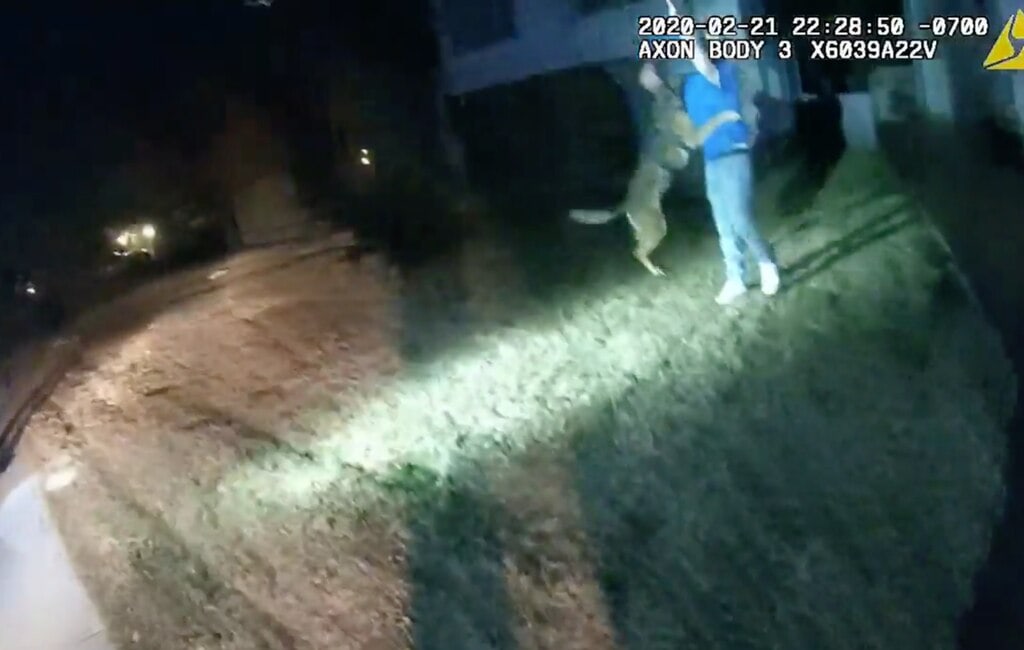 (Screenshot of West Valley City police video) Police body camera footage shows an interaction between a suspect and a K-9 on May 29, 2020.

Responding to criticism that police dogs are mauling too many suspects, the Utah’s legislature has passed a bill that will require additional training for agencies that use police dogs. According to the Salt Lake Tribune, the matter first got the legislature’s attention after the Salt Lake Tribune published a story showing a video of a black man being bit by a Salt Lake City Police Department police dog after he was attempting to comply with officers’ instructions. Body camera footage shows that the man was on his knees with hands in the air when the dog attack occurred. Even after the suspect was being put in handcuffs, the police officer ordered the dog to “hit” the suspect and the dog proceeded to bite and tear at the suspect’s leg. Even more disturbing, the officer told the dog he was a “good boy” after the dog attack.

Disturbing Pattern of Abuse. After the video surfaced showing the dog mauling the suspect’s leg, and after another incident where Salt Lake City Police officer D. Clawson was found to have used “excessive force” in an altercation with a 14-year-old boy at a Burger King, Salt Lake City suspended the use of police dogs and the Salt Lake County District Attorney’s office reviewed the case for charges. The officer involved, Nickolas Pearce, was later charged with a felony. As part of their review, Salt Lake City looked at 18 dog bite cases and based on their review identified a “pattern of abuse.”

The Bill as Solution to Police Dog Abuse. The bill, designed to reduce the incidence of this kind of police dog brutality, was proposed by Sen. Daniel Thatcher, R-West Valley City and labeled as SB38. The bill which requires that Utah law enforcement officers and their dogs be certified and annually recertified, has seen no opposition and has (surprisingly) received support from the law enforcement community.

Police Immunity if Bill Followed. The bill, if complied with, provides some immunity to law enforcement agencies. The bill states that a state, county or municipality will not be liable for damages caused by a dog so long as the dog and its handler have received proper training and they followed the written policy which details the appropriate use of the dog. The task of certifying and recertifying canines and their handlers has been given to POST (Peace Officer Standards and Training Counsel) to implement.

A Move in the Right Direction. I feel like this bill is a move in the right direction to restore accountability to law enforcement and to restore the public’s trust in the K-9 program. For the most part, these canines have been innocent pawns in these encounters as it has been the handlers that have pushed them to unnecessarily hurt suspects. Regular training and oversight will go a long way in making sure these dogs are not wrongly used by officers doling out punishment against a suspected law breaker. That’s what the court system is for. The police are tasked with safely bringing in the suspect in one piece so that a judge can analyze the suspect’s behavior against prevailing criminal law.

Legally speaking, if you have been unnecessarily and wrongfully bitten by a police dog, you can hold the police accountable and make them answer for the injuries you have received. These kinds of claims are called “civil rights” claims as your allegation is that there was an unreasonable search and seizure in violation of your Fourth Amendment right to be free from such a seizure and that the arresting officer used unreasonable and excessive force. If you have been affected by such a police attack or bite, you should consider talking to a lawyer about the remedies that might be available to you.

Ron Kramer is an injury lawyer practicing law in West Jordan and throughout Utah.