Fatigue or Sickness Being Investigated as Cause of Fatal Truck Crash

A truck driver driving a tractor trailer for Gurney Trucking loaded with pigs, lost control and stuck another motorist, Jaime Demille, 41 years-old of Cedar City at 11:30 p.m. on January 3, 2019. According to KSL News, the truck was heading southbound on I-15, six miles south of Cove Fort in Beaver County, when it veered to the left, crossed over the median, into the northbound lanes of traffic, and head-on into Demille’s Kia Optima. The momentum caused both vehicles to drop down a 100-foot embankment. Investigators says that Demille died on impact. The UHP is still investigating and have listed illness and fatigue as possible contributing factors.

It was just yesterday that I wrote about a trucker losing control of their big rig and crashing on I-80 near Magna, Utah.  I talked about how over 28% of truckers have sleep Apnea, a condition which does not allow the driver to be fully rested and can cause chronic fatigue. 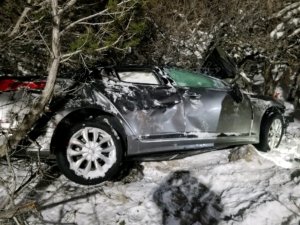 One person died after semitruck hauling pigs crossed the I-15 median and struck another vehicle, pushing it into a ravine Thursday, Jan 4th 2019. (Utah Highway Patrol)

I mentioned that just as a tire can slowly go bald, sleep and health conditions can be seen progressing and worsening, providing time for them to be addressed in the form of treatment and/or preventative action by a company that employs the driver. The bottom line is that trucking companies have a duty to prevent over-tired, fatigued or ill drivers from driving their 80,000 pound tractor trailers down the road.

There are a number of questions that demand to be answered after a fatal truck crash like this.

First, what was in the driver’s system at the time of the crash? After a serious crash like this, blood tests are mandatory and will show if the driver had anything in their system which would compromise their ability to drive safely. This information should be identified in the DOT report, and if not, it will be in the file the company keeps for the driver. 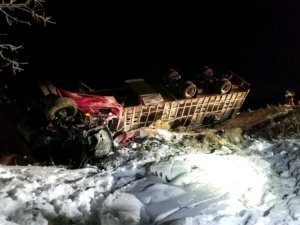 One person died after semitruck hauling pigs crossed the I-15 median and struck another vehicle, pushing it into a ravine Thursday, Jan 4th 2019. (Utah Highway Patrol)

Fourth, I don’t mean to intend that the driver or company is solely to blame, but what does the driver say about how the crash happened? What does the co-driver who was in the cab have to say? Was the co-driver asleep in the birth? Had a car cut the trucker off? Did a deer dash into the road? What’s the explanation? The statements collected from the UHP should help explain the drivers’ position.

Fifth, what does the trucker’s log look like? Was the driver driving “over” their hour restrictions, pushing them into a fatigued driving situation? I would hope investigators will look at these logs. Now that trucking logs are electronic, investigators will hopefully be able to download and look at the hours this trucker had been driving and whether the company was in compliance with the federal Hours of Service trucking rules.

Finally, what does the vital “black box” data from the truck’s computer show? Had the driver been speeding at the time of the crash? Trucking companies are not required to hold this information forever, with some destroying it after six months. I would hope in this case, that police investigators will have downloaded this information from the truck as part of their reconstruction report.

I hope the family gets to the bottom of WHY this crash happened. It is only after understanding the why that steps can be taken to make sure something like it doesn’t happen again.

Ron Kramer is truck accident and collision attorney practicing law in West Jordan and throughout Utah.

Could a Sleep Issue be Blamed for a Recent Utah Tractor Trailer Rollover?