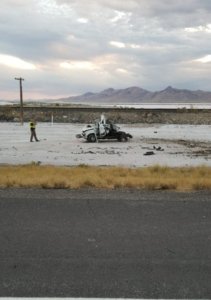 A 53-year-old woman from Tooele, Utah, Kristina L. Martinez, lost her life after a driver of a tractor trailer rear ended a car in early morning hours (around 6:55 a.m.) yesterday. According to KSL News, both the tractor trailer and Ms. Martinez, driving a 2000 Chevy Blazer were heading westbound on I-80 near the SR 138 exit, about 4 miles west of Grantsville. According to the UHP, woman’s tire had separated and she was traveling slowly at approximately 35 miles per hour when the crash happened. The big rig driver, on the other hand, was estimated to have been going around 75 mph at the time he or she rear ended the deceased. The violent impact caused the Martinez car to spin off the right side of the road and roll. The UHP said the driver was ejected and suffered fatal injuries. After a crash like this, I wonder what the driver of the tractor trailer saw as he approached this slow-moving vehicle. Yesterday, the sunrise in the Tooele area was 6:58 a.m. This was around the time of the crash and you would expect to be able to see other cars on the road without too much effort. Added to that would be lights that could potentially identify her to vehicles approaching at freeway speeds. It is unknown whether her hazards were on, but if they were, this would be an additional visual for the truck driver to see. 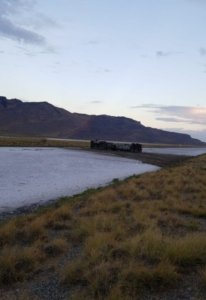 In investigating this crash, I hope the Utah DOT looks at where the truck driver was coming from, when they last got some sleep, whether fatigue or sleep apnea is an issue, whether the driver was distracted, whether there are any additional witnesses that could explain why the crash happened, did the driver even attempt to brake or swerve out of the way? The biggest thing for me is why was this car hit at 75 mph, the maximum speed you would expect the big rig to be going? It’s as if the driver didn’t apply brakes before impact. Even slowing down to maybe 40 or 50 could very well have saved this woman’s life.

Ron Kramer is a CDL-carrying lawyer practicing trucking law in West Jordan and throughout Utah.

Vulnerable Adult Injured While Under Care of Ogden Group Home