How Much is My Trucking Case Worth? 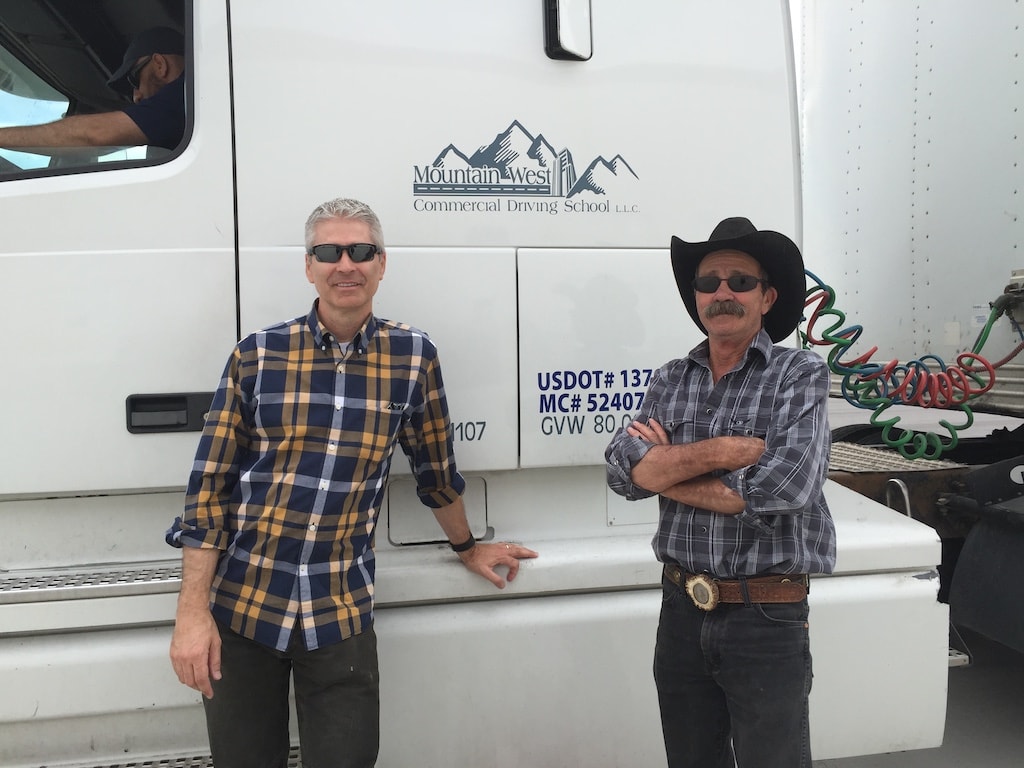 I often ask new clients I meet with what they’re hoping to achieve in their accident cases. Many will say they’re not out for a million dollars and that mostly they just want their medical bills paid. Others will say they want a “fair” result, with both medical bills paid and additional money for what they had to go through, something usually called “pain and suffering.” Sometimes I’m asked to give a specific dollar amount. This is hard to do because each case is unique. And especially at the beginning of a case, when there is little to no medical treatment, it is hard to know what a case may be ultimately worth. I do know in general, however, that cases involving commercial defendants tend to be worth more that cases involving a private individual.

When we take cases to trial, we are not allowed to tell the jury that the defendant, or wrong doer, has insurance. But that is the reality in virtually 100% of our automotive or premises cases: there is an insurance company behind the scenes that is defending the lawsuit and is on the hook to pay when there is a verdict. We do screen our cases to make sure we have what we call “collectability.” So even if we have a case with clear liability and serious injuries, we will probably turn down that case if there is no insurance. However, even when the jury might know there is insurance, I think there is a reluctance to really throw the book at a private individual.

This doesn’t mean that a strong claim cannot be made. If a defendant ran a red light, for example, this is conduct that will usually concern the jury and the allowing of a full and fair verdict can act as a symbol of the jury’s distaste for people running red lights and endangering the public. Before filing a lawsuit, however, insurance companies tend not to take private individual cases as seriously as if it involved a commercial defendant. Thus, settlement offers from insurance companies can be considerably lower because of the perception that the victim’s case against widow Brown will not go well.

The value of cases against private individuals, however, can go up considerably when the injuries and damages are greater. For example, if a person ran a red light and the victim was taken by ambulance to the emergency room and had an MRI and a surgical recommendation, that case will be worth considerably more than a case where there are just “soft tissue” injuries. In the many focus groups that I’ve conducted, most of the participants agree that there should be money in the verdict to cover all the related medical bills. Above that, however, many jurors are conflicted as to what the appropriate value should be. Some, for example, don’t even believe that money should be available for “pain and suffering” damages.

The value of cases against a private individual can also vary depending on the damage to the cars involved. If the case involves a scratch on the bumper, you can expect that offers on these kinds of cases will be much less than cases where there is clear, expensive damage to one or both cars. Ultimately, it comes down to what a jury is motivated to do on your case and how they feel about the severity of your injury.

Accident Claims Against a Trucking Company

Many attorneys mistakenly treat cases involving tractor trailers just like an auto versus auto case. This might be because the insurance company for the trucking company will suggest there is no difference. The difference, however, can be huge.

First, there will almost always be more insurance available when the driver of a big rig hits you. While the policy limit on a minimum Utah motorist policy caps at $25,000 per person, the policy limit on a trucking commercial policy will usually start at $1 million. This policy is usually an “aggregate” policy, or in other words, is for all claims that might be made in a crash, including claims by multiple people and property damage claims. Thus, a large property damage claim in a tractor trailer wreck can dilute the maximum that you could receive in such a wreck since it is all coming from the same pot.

Second, the sentiment against socking it to an elderly or sympathetic person is not there in most tractor trailer/commercial cases. The jury will hear that it was trucking company that owned and managed the truck involved in the crash. The jury will have the perception that the trucking company has more assets than some private individual and that perception will usually be correct. Subconsciously, the fact finder is more likely to allow for a full and fair verdict if they feel like the trucking company can afford to pay it. Remember, there is almost always an insurance company behind the scenes that will pay the verdict. The jury, however, is not allowed to hear that information, and so they will gravitate toward looking at the size of the company in trying to determine what kind of verdict would be appropriate.

Third, the injuries received when a car is forcibly struck by a large tractor trailer or commercial vehicle will generally be more severe than in an average car versus car scenario. These tractor trailers can weight up to 80,000, and with special permits, can exceed this amount. Therefore, when one of these trucks broadsides or rear-ends you, you can expect due to the mass of these heavy vehicles that your injuries will be more significant.

Fourth, different rules apply when a commercial vehicle is involved in a crash. While drivers in Utah (as well as other states) study a handbook to become familiar with the rules of the road when they get their learner’s permit, truck drivers likewise need to study rules that govern commercial vehicles. Utah’s commercial driver handbook is here. 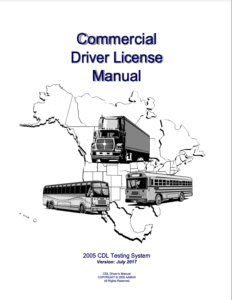 Along with this, there are the “federal regs” that commercial drivers who drive vehicles weighing more than 26,000 are expected to follow. This is yet another reason why attorneys should not treat a trucking case as a garden-variety auto versus auto case. That’s comparing apples to oranges.

Because I wanted to learn as much as possible about trucking cases, I went to truck driving school to get my CDL, or commercial driver’s license. I went through the same training and testing that other commercials drivers went through to successfully get their license. And I’m proud to say I passed my driver’s test the first time! That’s why I can say without hesitation that a heightened standard applies to commercial drivers over ordinary drivers. Because these drivers typically drive most of the day for a living, more is expected of them when they are on the road transporting their heavy loads around other motorists. Some people would call them “professional” drivers, and I would agree.

Common Trucking Rules Violations. Truck versus auto collisions happen when drivers are not following the safety laws that govern safe driving. And a truck driver is not always at fault. In fact, ordinary motorists seem to cause the bulk of these kind of trucking accidents. But far too many of these crashes are caused by commercial vehicle drivers who could avoid them if they followed simple safety laws and regulations.

One common trucking violation is following too closely to other motorists. You may have seen on the interstate when you see a semitruck barreling down on the car in front of them. Or on you! This can be pretty intimidating. According the Federal Regs, following too closely can be defined as “situations in which one vehicle is following another vehicle so closely that even if the following driver is attentive to the actions of the vehicle ahead he/she could not avoid a collision in the circumstance when the driver in front brakes suddenly.” So when the driver of a large truck is riding the bumper of another car and that motorist has to brake quickly, you can bet the professional driver will not have time to brake and avoid a collision. A study involving large trucks concluded that 5 percent of truck crashes happened because the driver was following too closely. 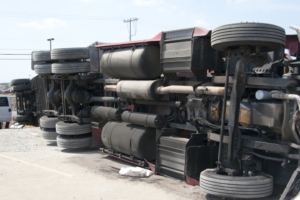 Truck flpped over well trying to avoid a car that pulled out in front of him,

During my training on the roads and highways around Utah, I saw that many motorists would take advantage of the gap that a driver of a large commercial vehicle should leave in front of them to stop safely. Just as soon as you established a safe following distance, a car would cut in front of you. The temptation to follow so closely so that other motorists don’t do this will inevitably lead to crashes.

Other rule violations, such as driving too fast in adverse conditions, can likewise lead to highway crashes and serious injuries or fatalities. In a trucking case we recently resolved, the trucker was traveling way too fast in whiteout conditions on snow-packed roads. Although the driver argued that he was unable to see stopped traffic ahead of him, leading to a multi-vehicle collision, section 6.3.10 of the federal regs clearly state that “extreme caution” should be exercised when such weather conditions affect visibility or traction and that drivers should significantly slow down to keep other motorists safe. Ultimately, the trucking company’s insurance company made the right decision when they paid a fair amount to settle this case. The recovery in that case greatly exceeded the amount you would expect in an auto versus auto case.

The bottom line is that a trucking case needs to be handled differently than a simple auto versus auto case to maximize its value. The attorney you hire needs to understand the differences and nuances in trucking safety laws, as well as the unique injuries and damages that can stem from these kinds of cases. As trucking accident attorneys, we are happy to offer free consultations and “second opinion” meetings to make sure your trucking case is going in the right direction.