Could a Sleep Issue be Blamed for a Recent Utah Tractor Trailer Rollover?

A tractor trailer rolled over on I-80 early this morning at 3 a.m., January 3, 2019, completely blocking I-80 westbound in Magna, Utah. According to KSL News, the driver was carrying car parts and rolled his or her rig from the eastbound lanes into the westbound lanes, effectively blocking traffic until crews were able to right the truck and trailer. The fact that this crash happened at 3 in the morning leads me to speculate whether the driver fell asleep at the wheel. There was no other contact with any other vehicle. And statistically, there are more rollovers during early morning hours than daylight hours. 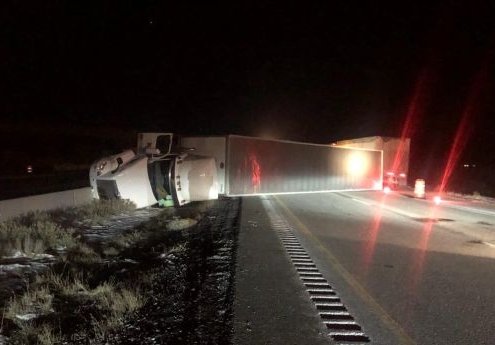 I-80 in Magna reopens after semi truck crash

Following a crash like this, the Department of Transportation will typically require some blood work to see if the driver was impaired. Along with this, I hope they look at whether the driver may have fallen asleep because of a sleep condition. Like a tire that is slowing going bald, sleep Apnea announces its presence well ahead of time. It is up to the trucking company and the driver to recognize the warning signs and take preventive action before someone gets hurt.

Tractor trailer drivers are held to a higher standard than just mere motorists. They are required to get what is called a CDL, which stands for Commercial Driver’s License. Having taken the training and getting my own CDL, I know the bar is set significantly higher for CDL holders. For example, they have to first be familiar with the safety equipment on their commercial vehicles, especially the brakes. Every time a driver starts their route, they are required to do an inspection of their truck, in much the same way an airline pilot goes through a checklist before flying. This “pre-trip” inspection is pretty comprehensive and is designed to catch not only glaring safety problems but also problems that might be developing, such as tires that are getting close to being below legal thread depth.

Then there is the driving part. CDL holders are tested before they get their CDL on all the driving rules that are unique to driving a large, commercial vehicle. After they pass their preliminary test, they can get a permit that allows them to train in an actual commercial vehicle. From my experience, these are large tractors — some with sleeping births that can hold other students when practicing – and trailers, pushing the maximum length of 53 feet. Before a CDL holder can get their license, they need to take an actual driving exam, where they go out with their instructor/tester who takes them through a series of driving maneuvers to see if they can handle driving the tractor trailer in the real world.

Finally, drivers need to be medically able to drive. A driver’s fitness for driving is first examined when they get their permit, but is also looked at every 1-2 years, depending on the driver’s health condition. In between these times, the company the driver drives for (if he or she is an employee) is required to make sure their drivers are fit to drive and are free from substance abuse. One way to do this is through continual and appropriate supervision of the driver, along with random drug tests. One problem that truck drivers have at an increased rate over the general population is that of sleep Apnea. This partly comes from drivers being mostly sedentary. In other words, because they spend so much time in the cab, and don’t eat as healthy as they should, they tend to put on weight. This contributes to a condition called sleep Apnea. In fact, a recent study found that up to 28% of commercial drivers suffer from mild to severe sleep Apnea. It’s a significant, known problem.

Legally speaking, if a known sleep Apnea condition contributed to this crash, then the company is responsible for any injuries or damages that result. Luckily, no one beside the driver was injured and no other vehicles besides the tractor trailer were damaged. Hopefully, the company and DOT will get to the bottom of the root cause of this crash — whether it’s sleep Apnea or some other reason — and take steps to prevent similar crashes from happening in the future.

Ron Kramer is truck accident and collision attorney practicing law in West Jordan and throughout Utah.