Two drivers of commercial vehicles were hospitalized on March 31, 2021, after a mid-afternoon truck crash in West Jordan, Utah. According to KSL News, the driver of a dump truck carrying dirt, also pulling a “pup” trailer, was heading south on Mountain View Corridor at 7800 South in West Jordan when the dump truck driver failed to stop at a red light and struck a semi-truck carrying a roll-off dumpster that was heading eastbound. The violent crash put the dump truck on its side.

Legally speaking, all drivers are required to stop at red lights. No exceptions. Stopping at a red is even more important when you are driving a fully-loaded commercial vehicle that has the potential to inflict grave personal injury and potential death to those it might strike. Running a red light suggests the driver may have been distracted or perhaps was on a tight timetable for his employer. None of these reasons are valid excuses for flouting safety laws and causing serious personal injury to another.

In this situation, given the facts of the story, those drivers who were injured because of the dump truck driver’s actions have a claim against the driver of that truck and the driver’s company if he drove for someone. Employers of commercial drivers are responsible through the doctrine of respondent superior for the negligent actions of their employees. They will also be liable for negligent employment claims, such as not properly screening their drivers, not providing the appropriate training and retaining someone as a driver when they are unfit to drive. This case suggests that the driver was indifferent to rules regarding driving free of distraction, a safety principle that trucking companies are required train their drivers on. 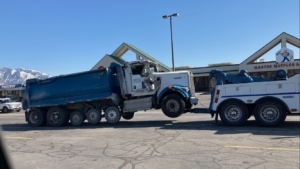 In tractor trailer cases such as this, time is of the essence in investigating the facts surrounding the case. Things such as the black box on the involved trucks need to be downloaded to collect critical information such as the dump truck driver’s actions preceding the crash. Did the driver attempt to brake? Was he speeding up? Was he “flooring” it to clear the intersection? How fast was he actually going? All these things can be determined through a review of the truck’s ECM or “black box” controller. Requests to preserve evidence and for inspection of these components need to be immediately made to preserve this important evidence. While it may be obvious that the dump truck driver ran the red light, other important components of the story need to be collected to get a complete picture of what happened. Hiring a trucking lawyer early will help preserve these critical pieces of evidence before it disappears or is routinely destroyed by the company.

Ron Kramer is a trucking attorney with an active CDL practicing in West Jordan and throughout Utah. He can be reached at Ron@RonKramerLaw.com.