Utah Man Dies After Being Smashed by Tractor Trailer

A man who was pinned by a tractor trailer yesterday has been identified as Trent Michael Thinnes, 33 years-old from Mantua, Utah. According to KSL News, the driver of a semi-truck was driving north on 2000 West around 3700 North in Far West when he or she drifted into an adjoining lane and struck a car driven by an elderly couple. The impact of that crash caused the truck driver to lose control of his semi and collide into Thinnes’ car, slamming it into a large metal fence, and fatally injuring Thinnes. The couple, meanwhile, were taken to an area hospital where they were in serious but stable condition. While no charges have been filed, the case is still under investigation.

As a CDL holder myself, I am particularly interested in the results of this investigation. Having gone through the qualification process, I know that truckers are expected to follow the highest standards of safety when they drive down the road. Among the questions I would ask if I were an investigator would be: WHY did the driver drift out of his lane? Was the driver using a cell phone? Was the driver impaired? Did the company perform random drug tests to make sure its driver drove sober? Was he or she sleep deprived? Any history of sleep apnea? What does the driver’s driving history look like? Did the company have any notice that this was an unsafe driver? Were there any warning signs the company had that raised red flags? Had the company done its job to make sure the driver was qualified, trained and supervised? Did the company keep regular logs for its drivers? Were there any equipment violation issues on the day of the crash? Was the truck kept in good repair? Had a proper multi-point inspection been properly performed by the driver as required by federal regulations? See example here. What were the results of the required blood test performed after a serious accident like this? 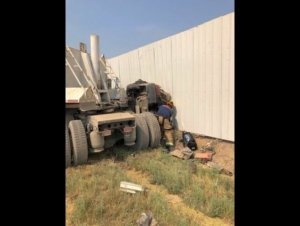 A man died Tuesday after his vehicle was pinned against a fence by a semitrailer in a crash in Weber County on Tuesday, July 31, 2018. (Photo: Weber County Fire District)

Crashes like this should not happen when a qualified, rested, undistracted and unimpaired driver is behind the wheel. As we see in this case, bad things can happen to all involved when a driver is not fully present when driving one of these 18-wheelers.

Legally speaking, since no one is putting any of the blame on the deceased, this is mostly likely a “wrongful death case” against both the truck driver and the company that employs him or her. As the crash was caused by a heavy, commercial vehicle (interestingly, no company name is visible on the truck trailer), then policy limits will generally be much higher than if the crash was caused by a passenger vehicle. The company may also be “self-insured” and capable of paying amounts in excess of what the actual policy is. I would recommend that those affected talk to a trucking attorney to find out what remedies may be available in this situation.