According to a recent story on KSL News, Utah’s Highway Patrol is looking to crack down on drivers who are using their cell phones while driving. The UHP invited news media for a ride-along in their specially-outfitted van, which allows a handful of officers traveling in the van to spot drivers who are driving distracted with their cell phone.

On one recent patrol, officers working both sides of the van were able to spot a number of drivers who were driving while manipulating their phone. When they spotted them, they would call ahead to other officers who would confirm they were on their phones and then pull them over.

Sgt. Jalaine Hawkes of the UHP made an interesting observation: she reported that drivers who were driving with other people in the car would rarely be on their phones. They were only doing this when they were alone, as if they knew their conduct was unsafe and only wanted to do it when there were no witnesses or when they weren’t jeopardizing the safety of a passenger. 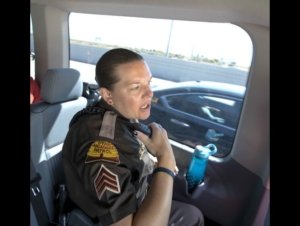 Utah Highway Patrol Sgt. Jalaine Hawkes radios information about a driver using a cellphone to a trooper during an operation to root out distracted drivers on I-15 on Wednesday, June 27, 2018. The operation included nine troopers, three spotters and one driver on I-15, I-215 and I-80 in Salt Lake County. The spotters rode in a black 16-passenger van as they looked for distracted drivers. The spotters then radioed troopers, who were in cars and on motorcycles, to conduct a traffic stop on the motorist. Traffic citations and warnings were given with the hopes that the motoring public will put down their cellphones and focus on driving. (Photo: Steve Griffin, Deseret News)

According to officers who were interviewed, the UHP is doing this (and allowing reporters to report on it) with the hope of deterring the public from driving while distracted. According to one UHP officer: “Our hope is to change the culture out there, to get people to put their cellphones away, to find a different way to do that.” “Your main focus is driving, it’s not texting.”  Ultimately, they are doing this so that “people are safer out on the road.”

Legally speaking, driving distracted has become an epidemic. Utah statistics show that 9 percent of crashes in Utah are attributed to distracted driving. The Utah Dept. of Public Safety’s own records show that in 2016 there were 5,748 cases attributed to distracted driving, which resulted in 3,303 injuries and 27 deaths. Officers, however, feel that this number is grossly underrated. One officer interviewed in conjunction with this story feels that the number is pushing toward 50 percent. This is supported by a recent study by Cambridge Mobile Telematics where they found that drivers were distracted by a cell phone at some point in their trip in over half of the crashes studied.

According to the Utah Dept. of Public Safety, most of the distracted driving cases are happening between 4 and 7 p.m. and are happening most often with younger drivers between the ages of 15-24. Being caught for driving while being on the phone is considered an infraction with fines ranging between $100 to $750.

Other distractions beyond cell phones can be children in the back seat, eating, putting on makeup, the vehicle infotainment system or navigation system or loose animals that may be walking around in the car. Such a distraction was said to be a factor in a recent crash that killed three people in Scipio.

From my point of view, a crash caused by a person on their cell phone or admittedly distracted in some way is always going to be more valuable than one where there was no identifiable distraction. Think about the level of recklessness of someone who chooses to drive like this:

A person driving at 70 MPH will cover 102 feet per second. That means if you drove for 4 seconds at 70 mph, you would cover 408 feet. That’s about the length of Rio Tinto’s field!

We would never consider closing our eyes for 4 seconds as we are driving. But just changing a song on our device or clicking on an address link could cause us to take our eyes off the road for this same amount of time. Unfortunately, all it takes is a few seconds of inattention to permanently alter someone’s life – or even ours. It’s just not worth it.

Ron Kramer is a personal injury lawyer practicing in West Jordan and throughout the state of Utah.