UPDATE: The UHP and UDOT have clarified that the penalty for not having the correct snow tires is an infraction and that no jail time would be expected. “That’s the level of offense this would be,” Street said. “It’s not a misdemeanor. It’s an infraction-level offense similar to if you were pulled over for having your registration out of date for a couple of weeks or a month or something like that.” CLICK HERE

On September 1, 2019 a little-known law went into effect regarding your winter tires. The new law is found in Utah’s Administrative Code R920-6 and requires that: 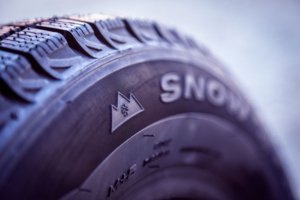 The penalty for not following this new tire rule is severe: You will be charged with a Class B misdemeanor and receive a $1,000 fine and/or 6 months in jail!

Comments to the article that KSL posted on this new law are varied.

Some commenters say that tires don’t matter that much and it’s just the driver that law enforcement needs to be concerned with. Some others suggest that this law is yet another tax on the poor and will make it unaffordable for families to travel in the canyon. The majority, however, seem to agree that tires can make a big difference in making cars safer in winter conditions. Others, recognizing that our roads are now less safe since Utah lawmakers did away with inspections, endorse the new tire law as a way to keep canyon roads, including Big and Little Cottonwood Canyon, safer for winter travel.

I personally think this law is a great idea. I have been a big proponent of having winter tires for many years now and feel that the law will definitely add an extra layer of safety to our mountainous canyon roads. And not just the canyon roads, but other roads like the I-15 will be affected positively since those same cars equipped with proper snow tires will also be rolling down major highways and byways. If I were making the laws, however, I would also require all-wheel drive cars to have snow tires as it makes no difference when it comes to stopping whether the car is 2-wheel or four-wheel drive. 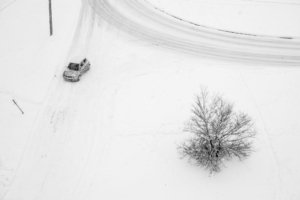 car turns on snowy turn of the road in winter during snowfall.

Legally speaking, those who cause a crash because of bad tires could be held accountable (criminally or civilly) for the damages they cause. These motorists may not mean to cause a crash, but if they were not careful in making sure their vehicle had good tires, they could be cited for an equipment violation as well as being liable for personal injuries others might suffer when they crash into them.

A few years ago, my wife was unable to stop at an icy intersection in our neighborhood and hit the back of another car, causing some minor damage. Even though she had “all season” tires on the all-wheel drive SUV she was driving, they were not enough to bring her car to a stop. We ended up paying for the other guy’s car damage as this crash should not have happened. In other words, it wasn’t an “accident” or an “act of God.” Slippery roads are a foreseeable thing in Utah and if our tires are not as safe as they could be, then those that lose control should not be surprised if a crash happens in slippery conditions. All the attorney representing that guy would have had to say is that the striking driver was going too fast for conditions and/or had faulty equipment (bad tires). Case closed.

Ron Kramer is an attorney practicing personal injury law in
West Jordan and throughout Utah.

Can a Semi Truck Driver Blame the Weather for a Crash?