After a rash of car accidents on Monday, the UHP is telling motorists that after a crash, they should remove their car from the roadway. According to KSL News, Monday’s storm resulted in over 200 car crashes, keeping law enforcement plenty busy. Their biggest takeaway: Get off the road! According to a UHP spokesman, after first calling 911,

“The most beneficial thing you can do for yourself and you can do for the first responders that are trying to help you is to drive your car off the interstate, if it’s possible.”

Sometimes cars can become disabled in serious crashes where removing the car is not an option. In those instances, UHP says to stay put with your seat belt on until a trooper can get to the scene. They caution the public: “Don’t try to get out. Don’t try to assess the damage right away. This is when we see members of the public getting hurt too.”

UHP’s announcement is inspired by the crashes on Monday where five troopers were struck and two patrol cars were totaled. They recounted close calls of officers jumping out of harm’s way before sliding, out-of-control cars came careening toward them and/or their cruisers. 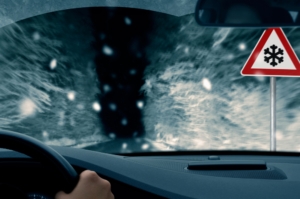 UHP is not saying that people should just drive off after a crash though. At a minimum, those involved in a crash still have an obligation to exchange
information at the scene. (They should also call the police after a crash.) The UHP is telling motorists they should tell the dispatcher where they are exiting at so the trooper can come find them and do a report.

Legally speaking, I echo law enforcement’s advice to drive off the road where possible following a crash on a highway. In the past, it hasn’t only been law enforcement that’s been injured. Our office has investigated and represented a number of people who were injured when they were outside of their car and another car for some reason struck their car and even them!

Obviously, someone can be seriously injured or even die when they’re struck at high speed by an out-of-control car. These secondary injuries, however, will be greatly reduced if we all head UHP’s advice and pull our cars off the road.

Ron Kramer is a personal injury and accident attorney practicing in West Jordan and throughout Utah.

What Do I Do If My Employer Won’t Report my Injury to Workers Comp?

What If My Employer Won’t Help Me Get Medical Treatment When I Was Injure...
Scroll to top Call Now Button