Tractor Trailer Fire Shuts Down I-15

A tractor trailer caught fire this morning and shut down the I-15 in Sandy. According to KSL News, a woman was driving an 18-wheeler heading southbound near 9100 South in Sandy, Utah, around 3:45 a.m. when she noticed her truck was having mechanical issues. After pulling over and getting out of her truck, she noticed that the trailer’s axels were on fire! She attempted to put out the fire with water, but was unsuccessful.

The fire then proceeded spread through the trailer, which was hauling a load of highly-flammable PVC glue. At some point, the driver was able to detach the tractor from the trailer, preventing it from catching fire. From there, the trailer continued to burn and was “fully engulfed” by the time emergency crews arrived to douse out the fire. The driver suffered smoke inhalation and minor burns but was released later in the morning. Emergency crews on the scene included hazmat crews to help clean up the mess. Three lanes and the southbound onramp to the I-15 were closed while the cleanup was being completed. 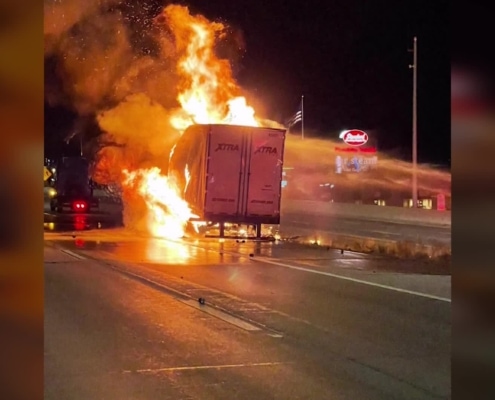 This story raises the question of whether there was advanced notice that there were mechanical issues with this truck and its trailer. Often, mechanical issues will present themselves early, giving the driver and company time to make repairs to keep its driver and the public safe. In this story, the axels on the trailer had actually caught fire! This suggests there may have been a wheel bearing or brake issue that caused this. Should this have been discovered before the fire happened? What was visible to the driver when she performed her pre-trip inspection that day? Incidents such as this should not spontaneously happen and I suspect the trailer was having issues before this event happened that should have provided a warning. Inspectors from the Utah Department of Transportation no doubt were looking for such clues when they did their inspection after the fire was put out.

Luckily, the driver was not seriously injured and no other motorists were involved. Still, truck drivers and their companies have a duty to make sure their trucks are in top condition at all times, or they should not be on the road.

Ron Kramer is a tractor trailer lawyer practicing law in West Jordan and throughout Utah.