A man from American Fork lost his life this past Saturday when his Honda lost a battle against a loaded Kenworth on Highway 40. According to KSL News, the tractor trailer hauling two tank trailers was traveling east on U.S. 40 near Strawberry Reservoir on July 13, 2019 around 7:40 p.m. At or around this time, 25-year-old Gaje Combs from American Fork, UT, pulled out from Strawberry Road, attempting to turn left onto U.S. 40, when he was struck broadside on the driver’s side by the semitruck. Combs was sadly pronounced dead at the scene and his passenger was transported in critical condition by helicopter to Utah Valley Hospital in Provo. The truck driver was also injured in the crash and was taken by ambulance to Heber Valley Hospital. The crash is still under investigation. 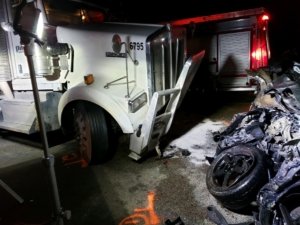 Legally speaking, drivers making left-hand turns are required to yield the right-of-way to other motorists. The jury instruction that would be read to juries sitting in judgment on a case like this reads:

“A driver turning left has a duty to yield the right-of-way to any vehicle approaching from the opposite direction that is so close it is an immediate hazard.”

Obviously in this case, the tractor trailer was an immediate hazard that the driver was required to yield the right of way to. The failure to yield in this case had fatal consequences and potentially fatal ones for the passenger of the Honda and serious ones for the driver of the tractor trailer. Based on the facts of the story, the victims in this crash would have a claim against the bodily injury policy on the Honda as well as claims on their own under-insured motorists policy.

Ron Kramer is an attorney practicing personal injury law in West Jordan and throughout the state of Utah.

Utah Bus Driver Found DUI With Passenger on Board