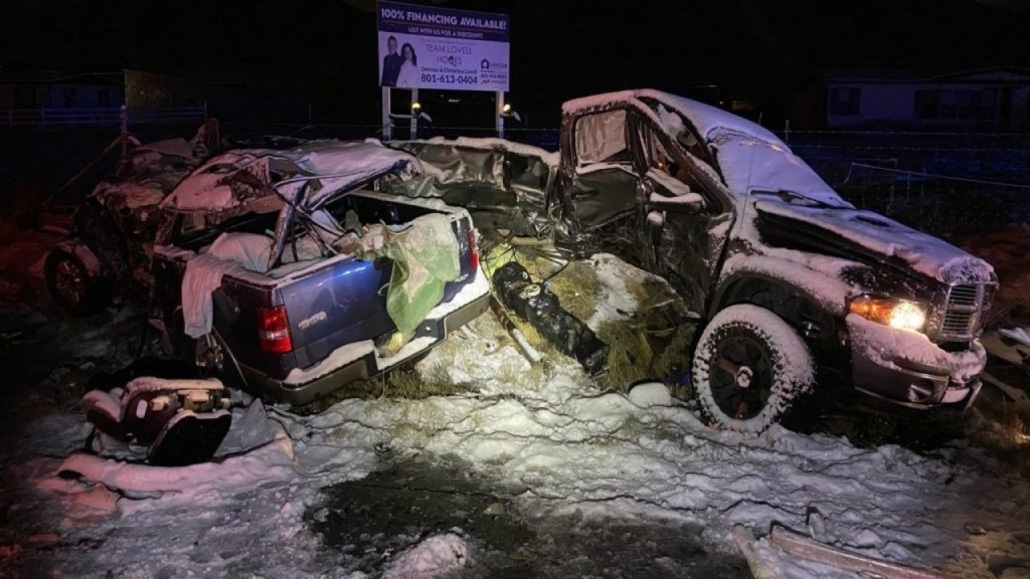 An 18-year-old teen passed away February 27th and others are critically injured following a violent pickup versus pickup truck crash in Erda, Utah. According to Fox13 News, the deceased, Treyton Ellis of Tooele, was driving a gray Dodge Ram 2500 going southbound on SR 36 in snowy conditions around 9 p.m. when he lost control of his truck, overcorrected and went into the opposing lane of travel around 4700 North. He was then t-boned by a motorist driving a blue Ford F-150. According to the UHP, “The Dodge was traveling too fast for conditions and lost control to the left and hopped the concrete divider facing eastbound across both northbound lanes.” The UHP reported that Ellis died at the scene of the crash.

In the Ford F-150 was a family of five: a husband, wife, and 3 teenage kids in the backseat. All had their seatbelts on. The violent crash that ensued when the Ford broadsided the Dodge left most of the family with critical injuries, for which they were transported to the local Tooele Valley hospital and then to hospitals in Salt Lake County.

The father was reported to have suffered two fractured femurs, a shattered pelvis, a fractured arm and collarbone. The mom suffered a cracked sternum, fractured arm, 12 broken ribs and fractured backbones. One of the children suffered ruptured intestines. The other two kids are said to be recovering. A Facebook page has been set up to help with their mounting medical expenses. Given a crash of this magnitude, I suspect they all at a minimum suffered a concussion and may even have symptoms of a mild traumatic brain injury.

Legally speaking, the family in the Ford has a negligence claim against the insurance policy and/or estate of the 18-year old. Given the description of the severe injuries, it is very likely there is not enough insurance to cover the bills. In situations where there are more bills than policy, the family can look to their own “underinsured” policy to make an additional claim. Hopefully there is health insurance. If so, the health insurance will want to be reimbursed after all the bills are paid and will have a “subrogation” claim against the family on the claim against the teen driver. Under Utah law, if the claimants are not “made whole,” they cannot assert a lien on any amount collected on the underinsured policy. If there is no underinsured policy, the hospital can file a hospital lien and seek to get a recovery directly from the proceeds of insurance company settlements. That’s where an attorney can help by negotiating to help preserve a portion of the money before the hospital and its collection arm, MedData, swoop in and claim all of it.