Police have identified Luke Allen Hansen, 18 years-old, as the fatality in a recent crash in Spanish Fork, Utah. According to KSL News, the crash happened in the morning of July 27, 2018, at the intersection of Highway 6 and Expressway Lane. 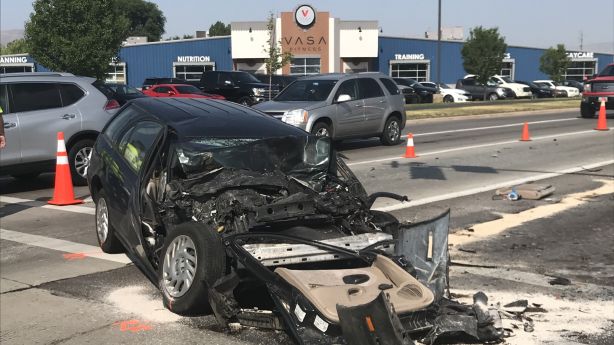 According to reports, the deceased, driving a green passenger Saturn, was traveling northwest on Highway 6 when he veered toward the driver of a pickup truck in a southeast-bound lane, who was about to make a left-hand turn at this intersection. His light, according to witness statements, may have been red at the time. What resulted was a violent collision, with serious injuries to both drivers. Hansen was taken in critical condition to Utah Valley Medical Center, but sadly died from his injuries a short time later despite the fact he had his seatbelt on. The 71-year-old driver of the truck was also treated and is expected to make a full recovery. Police say they may never know the cause of the crash.
Commentators to the story, however, suggest a couple explanations for why this crash (and others at this intersection) happened.
Unsafe intersection. Our office has represented clients hurt in this very intersection. While our case involved a negligent semi-truck driver who had violated a number of safety rules, the speeds at this intersection seem to heighten both the frequency and the severity of crashes that do happen. For example, the speed limit at this intersection for both eastbound and westbound traffic is 50 mph. This speed, in the minds of the locals and myself, is simply too fast.
According to commenter Briguy:

“The speed through that area should be lowered due to the close commercial streets and pedestrian use. It’s not a farm road anymore in that section.”

With the DOT-allowed speed limit of 50, commenter jandb0103 noted that it is sometimes hard to judge speed:
“Because it is a highway, Spanish Fork can’t do anything about it, it has to be UDOT. There for awhile they didn’t allow left turns without a specific green arrow up at the next light on Center street based on residents’ advice, but when they redid the bridge they allowed it again. It really makes the intersection so much more dangerous because it is so hard to judge how fast the cars are coming towards you.
Finally, one commenter named items_for_sale that lives in Spanish Fork summed up the frustration of this intersection: “I live in this town and go through that intersection every day. There is so much congestion and traffic there with constant accidents. It’s a commercial shopping area but just yards from freeway entrance and exit. Traffic is high speed and always so busy. There needs to be a solution to all of the deaths and accidents there. Highway 6 is frightening.”
My take is that UDOT needs to revisit the safety of this intersection. Things could be and should be done to make this intersection slower and safer. The interest of UDOT in providing smooth tarmac for high-speed travel within Utah needs to be balanced with the needs of the community in making sure its citizens and visitors to its city are protected. While the speed need not be lowered to 25 mph, it does need to be lowered. Certainly pedestrians, runners, mothers pushing their kids in strollers, cyclists, etc., who cross the street at this intersection would appreciate a lower speed limit as they attempt to safely cross from one side of this super wide intersection to another. I would suggest that a speed limit of 35-40 mph would go a long way in reducing the incidence of traffic crashes and the severity of injuries that might result from them.
Equipment Failure. More than one commenter suggested that the crash may have been caused by the power steering failing in the Saturn.
For example, DJ’s Quality Name Brands wrote: “Saturn vehicle? I’d intently look at the electric power steering unit as possibility. [If] that unit goes faulty it can be difficult to steer. So many defects and recalls on Saturns. Faulty gas lines, leaking gas tanks, key tumbler issues, airbag switches….. GM’s nightmare.”
Commenter helar agreed and responded: “We had a 2008 Saturn Outlook and the power steering went out on me suddenly. I glad I was in a parking lot when it happened. We had so many problems with that car.”
I agree with the above commenters that it would be a good ideal to have the systems on the Saturn checked to see if a product defect on the car led to this crash happening. Legally speaking, vehicle manufacturers may be held responsible when known product defects lead to the loss of control of one of their vehicles and people are hurt, or worse.
Ron Kramer is a personal injury attorney handling cases in West Jordan and throughout the state of Utah.

A man died Tuesday after his vehicle was pinned against a fence by a semitrailer in a crash in Weber County on Tuesday, July 31, 2018. (Photo: Weber County Fire District) Utah Man Dies After Being Smashed by Tractor Trailer
Scroll to top Call Now Button