Last week, a driver operating a tractor trailer stopped on the I-15 in Draper, leading to a crash and the death of Jacob A. Miller, 23-years-old from West Jordan, Utah. According to KSL News, the big rig hauling two trailers was heading northbound on the I-15 near 14900 South at around 10:50 at night. The UHP said that the truck had experienced “mechanical” problems which caused the trucks brakes to activate. Jacob Miller subsequently ran into the rear end of the semi truck at freeway speeds. 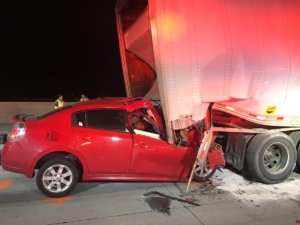 The UHP clarified that the truck had an “air malfunction” that led to the tires locking up on the truck. According to the UHP, the truck was disabled on the highway for 5 minutes when the crash happened. By reports, the driver attempted to move the truck out of the travel lanes but was unable to do so. The driver said “he did not know” if the truck’s hazard lights were on or not. Meanwhile, the UHP is trying to figure out what the “car’s driver was doing” as there was little braking before impact. No impairment was noted and the UHP issued a warning for motorists to pay attention when they drive. The UHP concluded that “it’s kind of hard to say if it could have been prevented or not.”

In my opinion, however, I think this crash was totally preventable if the driver (and perhaps company) had done more to make sure that its truck was road worthy and as visible as possible after the brake malfunction.

First, the brake malfunction. On tractor trailers, if there is an issue with the brake system where pressure drops below 60 psi, the low air warning buzzer will come on. As the brake system continues to drop in air pressure, the spring-activated emergency brakes (which were being held back by sufficient air in the system) will automatically engage and lock up the rear or trailer tires. This fail-safe is supposed to stop the vehicle if its braking system is having problems. See semi truck brake summary here.

That’s why commercial drivers are required to do pre-trip inspections before they begin driving for the day: so they can identify problem areas with the commercial vehicle so they can be repaired before 80,000 pounds of moving mass is put on the roads. In this case, the family of the deceased deserves to know about the status of the maintenance of the truck, and in particular, its brakes. By and large, though, it’s an honor issue, where driver and company must be trusted to be honest on the pre-trip inspections to catch any problems that may be lurking. For the most part, mechanical break-downs like this don’t suddenly surface, but give tell-tale signs that problems are looming in advance. And with something serious like brakes, you want to ere on the side of caution and take the truck out of service if there is any indication that the truck is less safe than it should be.

Second, I don’t believe the driver made the truck as visible as possible after his truck came grinding to a stop. In this instance, the driver was required to put out reflective warning signs to advise drivers approaching from behind that the truck was disabled. I read nothing in the article where it says this happened. Further, for the driver to say that he didn’t know if the hazards were on suggests to me that they actually were NOT on. This should have been the first thing the driver did after his or her truck came to a stop. If they were not on, this represents deficient training on the part of the company the driver drove for.

Other questions need to be answered and records (including the police and DOT report) need to reviewed to see exactly what happened here. I would encourage the family to look into these issues to get answers to these and other important safety questions in this unfortunate wrongful death case

Ron Kramer is a CDL-carrying attorney practicing trucking law in West Jordan and throughout Utah.

Can a Semi Truck Driver Blame the Weather for a Crash?
Scroll to top Call Now Button