The Kramer Law Group is pleased to announce a confidential settlement against a landlord who conditioned living in his rental with sexual favors. The requested sexual favors were requested to offset accrued late fees and/or rent.

Even though the tenant had lived in the rental for at least four years before the sexual harassment began, the landlord began his entreaties in the summer of 2020, during the height of the pandemic, when his tenant started to get a little behind in her rent. Due to the economic consequences of Covid-19, our client was struggling to pay her rent and fell more behind. This only served to intensify her landlord’s propositions to her and he started threatening her with eviction, even though he had recently extended the lease by one year. Many of his overtures were captured in text messages that the landlord carelessly sent to his tenant, creating a dream paper trail, and implicating him in clear violations of the Fair Housing Act that prohibits sexual harassment in housing and would prove hard for him to escape from. (See text messages below.) 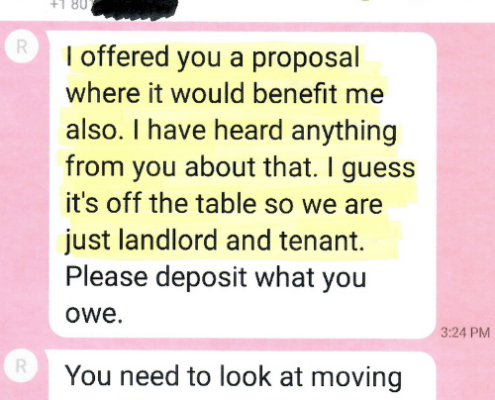 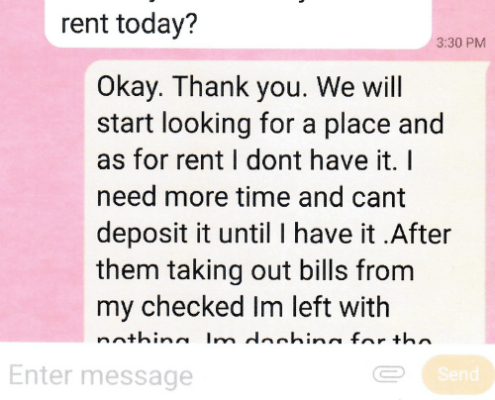 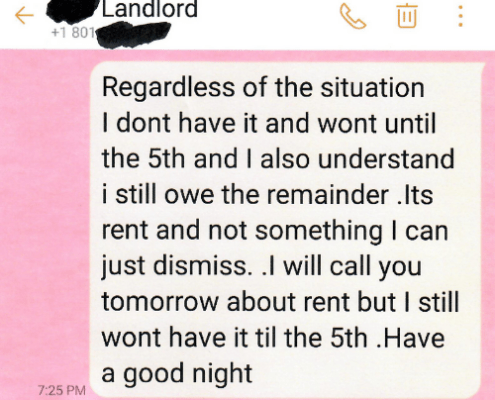 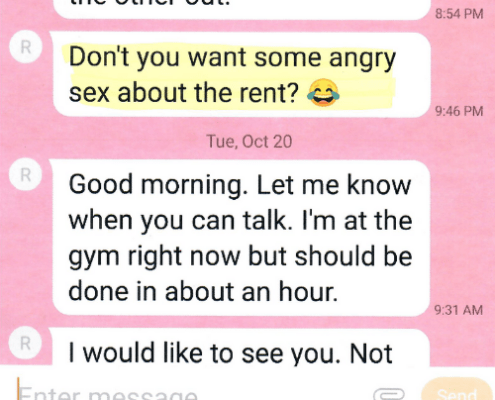 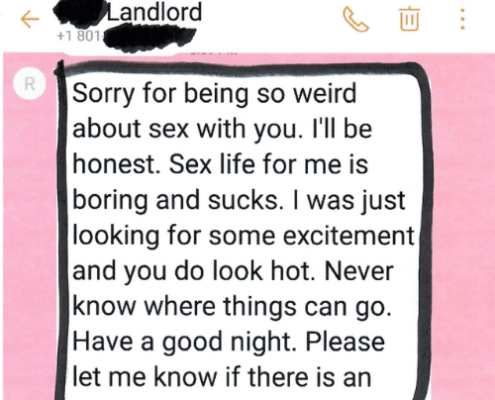 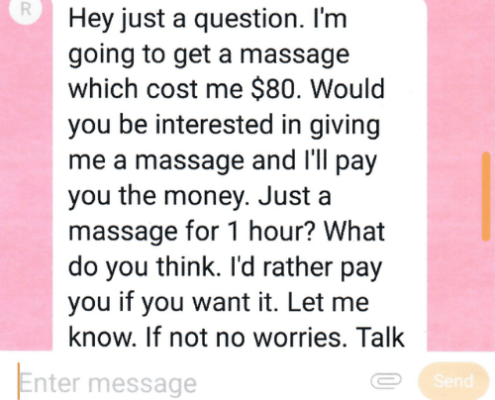 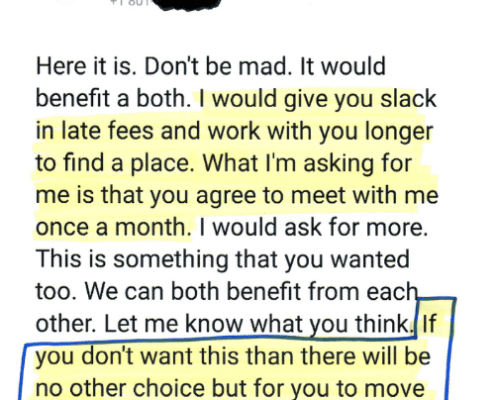 The landlord would also creep around her rental house, showing up at odd times, including early in the morning, and even knocking on his tenant’s window in an effort to see her. During this time, our client told him she wanted to keep the relationship “landlord-tenant only.” But the landlord had other ideas.

Given the retaliatory actions that had been threatened by her landlord, she contacted the Fair Housing Office and filed a complaint with HUD. You can do the same HERE. The HUD office then assigned an investigator and she began collecting evidence to support the tenant’s complaint that the landlord was violating HUD’s prohibition on sexual harassment in rental housing. The HUD investigator subsequently interviewed the tenant and collected what we consider to be strong evidence against the landlord. The HUD investigator then proposed the parties agree to attempt conciliation, or settlement talks, to see if the case could be resolved. Although we were doubtful the case could be settled, the landlord eventually agreed to pay a confidential amount the tenant was able to accept. The terms of the settlement additionally included the landlord writing off past due rent and late fees, calling off the eviction that he had filed against her, giving her additional time in the rental before she had to move out, and agreeing to HUD training and oversight on his future landlord-tenant activities.

If the case had not resolved, the landlord would have evicted our client, as the settlement happened only a couple days before the sheriff was due to arrive and forcibly evict her from her rental house. While an eviction would have been good evidence of landlord retaliation in the lawsuit we were planning to file, it would have been very difficult for her at the time. Even a reprieve of four weeks from getting kicked out, has proven difficult for her and still doesn’t remove the trauma from having to deal with a predatory landlord. This settlement will help her as she regroups and moves on from this traumatic experience.

This settlement will also hopefully deter other landlords from sexual harassing their tenants. “Sexual harassment has no place in landlord-tenant relations. We want landlords to know that sexual harassment will not only get them in trouble under federal and state law, it will expose them to hefty civil damages when they exploit the landlord-tenant relationship to gratify their own sexual desires,” said attorney Ron Kramer. “At the end of the day, a vulnerable tenant should not feel pressured to give into their landlord’s advances just to keep them and their family from experiencing what is usually an incredibly disruptive eviction process. It’s wrong and there are laws that should keep this from happening.”

“We’re letting people, particularly renters, know about this settlement in the hopes they can identify if this is happening to them or someone they know and care about, so steps can be taken to stop it,” says Kramer.

Ron Kramer represents plaintiffs in sexual harassment and assault cases as the lead trial attorney at the Kramer Law Group in West Jordan, Utah. You can reach him at 801-601-1229 or ron@ronkramerlaw.com.

Man Terrorizes Utah Family on I-15