A Juab County sheriff’s deputy, Virge Sickels, who was responding to a crash this past Tuesday, was rear-ended by a semitruck. According to KSL News, the deputy was enroute to assist UHP troopers at the scene of another crash on the I-15 just south of Nephi, when the tractor trailer crash happened. The deputy had stopped when he saw cars off the road and reportedly pulled over to investigate.

According to the story, the deputy had no sooner pulled off the road when his pickup truck was rear ended by the big rig.  Luckily, the deputy was wearing a seatbelt. Weather conditions were said to be “terrible” at the time with heavy rain and 1-2 inches of standing water on the road at the time. The crash totaled the police truck and the deputy was taken by ambulance to a local hospital and released a short time later. 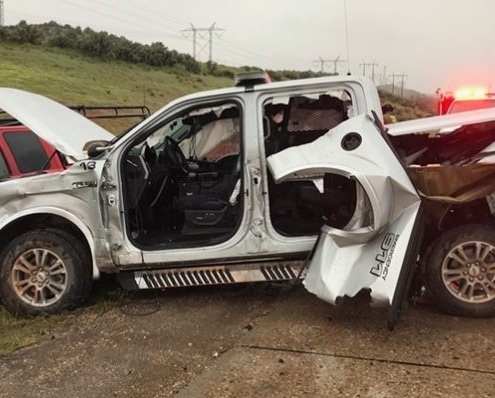 In the story, there is no talk of why the semi-truck driver rear-ended a police vehicle that was off the road. I think there should be.

Legally speaking, commercial drivers are supposed to exercise caution in adverse weather conditions. If drivers can’t see the road or they feel like conditions have gotten unsafe, they should pull off the road rather than continue. And truckers can’t just follow the taillights of the cars in front of them. They need to be able to see clearly enough that they can independently see where they are going and be able to identify all hazards ahead of them.

Based on the facts in the story, it appears the deputy has a claim against the trucker for injuries he sustained. The story talks about him being released with just bumps and bruises and nothing really serious. I hope this is the case. However, in dealing with hundreds of car crash cases over the years, it’s my experience that the pain and symptoms don’t usually set in until a day or so after the crash happens. Given the hard hit by an upwards of 80,000 pound commercial truck, I would expect there very likely could be a permanent injuries stemming from this crash. Of course, the workers comp system will try and get him back to work as quickly as possible, even if he feels he has not fully recovered. Hopefully this won’t be the case. If it does happen, however, I think it would be a good idea for him to see another “second opinion” doctor who is not “company-owned” for another opinion on what the course of his treatment should be.

Ron Kramer is an attorney practicing personal injury law in West Jordan and throughout the state of Utah.