The driver of a Salt Lake Express bus carrying 18 passengers rear-ended a semi double trailer filled with gravel on August 9, 2018. According to the St. George News, the driver was heading southbound near Nephi on the I-15 in the morning and apparently didn’t see the large gravel truck in front of him before he rear ended it, causing the rear axle on the trailer to break off in the crash. Equipment was brought to the scene to get the gravel out of the truck to help clear the wreck off the freeway. Five of the eighteen passengers on the bus were taken to Central Valley Hospital in Nephi as well as to Mountain View Hospital in Payson. Other passengers were injured and transported to area hospitals via a school bus from Juab school district. UHP is blaming the crash on distracted driving. 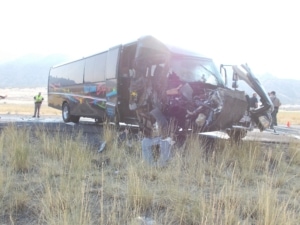 I have been hard on gravel trucks and the companies that put them on the road because of the collateral property damage they cause from falling rock products that they don’t want to pay for. In this situation, however, the driver appears to be free of fault and was just driving down the road (undoubtedly with gravel dripping from the trailer!) at the time of the crash. He was an innocent victim as were the passengers on the minibus. From the video posted just after the crash happened, it is clear that there were a number of injured people on that bus.

I hope everyone who has even slight symptoms from this crash gets themselves checked out. The PIP (personal injury protection) insurance on the bus should cover up to at least $3,000 for medical bills, so there should be no reason why even a poor college student couldn’t get themselves evaluated. In this case, there might be some orthopedic injuries (I did see some blood in the video) and a fair amount of neck and back injuries. For neck and back complaints, I would recommend a chiropractor who regularly sees patients injured in auto collisions as a good place to go for an evaluation as the doctor can take x-rays to make sure the spine didn’t come out of alignment in the crash.

Legally speaking, the passengers on the bus who were injured — and even the driver of the tractor trailer if he/she was injured —  have a claim against Salt Lake Express for this preventable crash. Under Utah law, there is no minimum amount of bills necessary for a bus passenger to bring a claim against the company and their insurance company.

Utah Man Dies After Being Smashed by Tractor Trailer

A man died Tuesday after his vehicle was pinned against a fence by a semitrailer in a crash in Weber County on Tuesday, July 31, 2018. (Photo: Weber County Fire District)