A police chase between a fleeing auto theft suspect and an innocent motorist, Rita Dolph, 17 years-old, ended with tragic circumstances on June 30, 2018 in Santaquin, UT.

According to KSL News, a 17-year old allegedly stole a Dodge pickup truck from a home in Payson late Saturday night. Law enforcement were tipped off and a chase began in Salem. Police soon called off the chase after the suspect got onto I-15 heading south. UHP officers, however, picked up the chase heading south. The suspect driving the car went on to exit the freeway in Santaquin and ran a red light at the Main St. exit, crashing into the driver’s door of Dolph’s car that was heading east at the time. Sadly, Ms. Dolph did not survive her injuries and passed away a short time later after having been transported to a local hospital by medical helicopter.

The driver of the stolen truck was also injured and after treatment for his non-life-threatening injuries, was taken to the Slate Canyon Youth Detention Center and charged with vehicle theft, failure to respond to the command of police, possession of stolen property and other numerous moving violations.

Legally speaking, Ms. Dolph was an innocent victim in this sad sequence of events. She was at the wrong place at the wrong time. Obviously, it was the stealing of the car that set these events in motion and it was foreseeable that law enforcement would be involved at some point in recovering the stolen car and/or bringing the alleged thief to justice. Also foreseeable, however, is that a police chase on state roads or highways could cause a reckless suspect trying to evade capture to disobey traffic signals and injure an innocent motorist or pedestrian. This is why many cities have laws that require the police to disengage a suspect so they don’t go on to recklessly injure an innocent party. 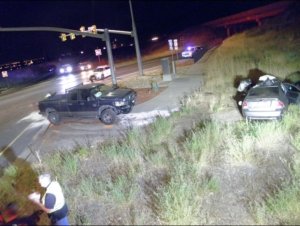 A 17-year-old girl was critically injured Saturday after a teenager crashed into her following a vehicle chase with authorities in Utah County, officials said. (Photo: Utah Highway Patrol)

Obviously the person driving the stolen car, who initiated the whole chain of events, should be held fully responsible for his actions. And there is nothing in the law that says he shouldn’t. Yet, if the actions of law enforcement were a significant contributing factor to this fatal crash, then the law allows a fact finder to consider the role law enforcement played in the crash.

After reading the story, there remain a number of unanswered questions: Does UHP policy allow their officers to chase a suspect into a city area? Had a call to stand down been issued to the chasing officer? Did the UHP chase the car to the end of the off ramp? These and other questions should be considered when putting together the story of how this crash happened.

In terms of claims against government entities such as the UHP, these types of claims need to be made within one year of the event happening. This is different than the four years that the family has to make a claim against the teenager that allegedly stole the car in the first place. Given that the truck was stolen, there may be an exclusion on the policy of the truck for this type of illegal activity. Assuming this is the case, I would expect the victim’s auto insurance to pay over the policy limits for an “uninsured motorist” claim.

Ron Kramer is a Utah personal injury attorney practicing in West Jordan and throughout the state of Utah.