Police reported over the weekend that Lief Johansson, 62 years old from Henderson Nevada, was killed in tractor trailer versus auto accident a few miles north of Paragonah, Utah. According to KSL News, the Nevada man, who had dementia and was reported as “endangered” and missing, was found by the Utah Highway Patrol after his car was struck by a UPS truck pulling triple trailers. 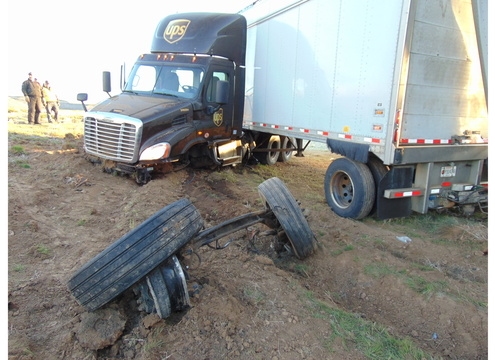 Unfortunately, they didn’t arrive in time and Johansson’s car was struck, fatally injuring him.

As a result of the crash, the semi jackknifed into the median, tearing the front axle off the truck. The silver car that Johansson was driving was pushed onto the right shoulder. Emergency crews arrived in an effort to remove him from the car, but it was too late. The truck driver suffered minor injuries.

Legally speaking, truck drivers are required to scan the area ahead of them and at freeway speeds, should be looking a good block ahead of them. Unfortunately, this changes when the truck’s headlights only illuminate 100-200 feet ahead of them in the dark. Still, you wonder what options the truck driver had when confronted with a car stopped directly in front of him or her. I agree that there would be no time to completely stop, but wonder if there was enough time to take evasive measures to swerve out of the way.

Compounding this problem is the fact that this semi-tractor was pulling three trailers. These things certainly don’t stop or turn on a dime. The police report could clue the family into the results of the investigation and whether this crash was avoidable or not. Black box data, that was hopefully collected by the UHP, could also shed light on closing speeds and how soon before the crash brakes were applied. This information, among other pieces, are essential in understanding whether there is a claim here or not.

Ron Kramer is an attorney practicing law in West Jordan and throughout Utah.

Bald Tires May be a Factor In Recent Nephi Motorcycle Crash