In order to protect the rights of one of our clients, our office just filed a medical malpractice lawsuit against Lakeview Hospital in Bountiful, Utah, alleging that the actions of its staff led to an easily-preventable injury.

It was a fall off a stepladder at home that led our 50-something client to go to Lakeview in the first place. After the fibula fracture in her left leg was competently repaired with an external fixator by Lakeview doctors, she was kept for physical and occupational therapy before her expected discharge home. During this time, when she needed to use the restroom, a nursing assistant would help her. Her doctor had put it in the notes that when she needed to use the bathroom, she was to be assisted by a nursing assistant and with a front-wheeled walker. This worked fine, with no issues until one morning when a new nursing assistant showed up to help her with a bathroom visit. This assistant told our client that instead of using a walker to get to the bathroom, she was going to have our client use crutches to get to the bathroom! 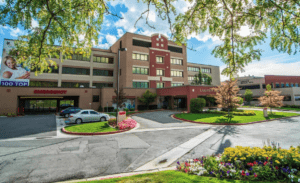 After being helped to the bathroom on crutches, and after using the bathroom, our client got herself to the bathroom door like she had multiple times before, and opened the door to tell the assistant she was done. To her astonishment, however, the nursing assistant had disappeared! She called out for her but she was nowhere to be found.

Our client now had a big problem. She was getting fatigued due to a combination of being on strong pain medications and having an arthritic right hip and knew she would not be able to keep herself up for much longer. She considered backtracking to the toilet or continuing about 5-6 feet to her hospital bed. Under the circumstances, she felt it safest to attempt to get to her bed. Sadly, she was only able to take one step before she lost her balance and fell forward, landing on the external fixator on her leg. The pain was excruciating and shooting. The worst pain she felt in her life. She called out for help on the ground and after a minute or so, several staff came. A couple minutes after this, the nursing assistant that had disappeared showed up. Finally! But way to late to have prevented her fall from happening.

X-rays taken shortly after this hospital fall showed she had a brand-new break caused when the external fixator hit the ground. Because of the traumatic nature of the fall, she was transferred out of the hospital to McKay Dee for repair to this new break. It took an additional year and another surgery before she able to start getting around like before.

In our Complaint, we alleged that the nursing staff failed her by not making sure she was safely moved between the bathroom and her hospital bed, and that if the assistant needed to leave to take a smoke break or something like that, they should have let her know so she could just stay where she was. We also alleged that our client should have been told that its nursing staff could disappear suddenly for any reason and there may not be someone there to help her get safely back to her bed.

Now that the Complaint has been filed, we will begin the litigation process, which we expect to take a good year. After this, we will name our experts and ask the judge for a trial date. Stay tuned for more updates as this case progresses.

Ron Kramer is a medical malpractice lawyer practicing in West Jordan and throughout Utah.