In another instance of a motorcycle getting hit by a motorist who “didn’t see” them, a driver made a left-hand turn directly into the path of a Harley Davidson riding on SR 38 over the weekend in Deweyville, Utah. According to KSL News, the driver of the motorcycle had no time to react when the motorist in a Ford Taurus made his left-hand turn right in front of them, causing the Brett and Heidi Thomas to fly off their bike, hit the car and then the road. Sadly the passenger lost her life from injuries stemming from this crash and the driver is in critical condition.

Unfortunately, this type of crash happens way too often when drivers fail to make sure the coast is clear before making their turn. Two-wheeled vehicles, including bikes, are admittedly harder to see than a vehicle. The lighting conditions can factor into just how visible the bikes can be. However, this crash happened at 6:15 in the evening in July. There was plenty of light and the black Harley was there to be seen for the careful driver. So when someone in a situation like this says they just “didn’t see them,” what they are really saying is that they weren’t paying enough attention to the road — for both large vehicles and smaller motorcycles — and to conditions around them.

So that this death may not be in vain, the report says that the family will be passing out bumper stickers that say: “Watch out for motorcycles” at Heidi Thomas’ funeral. The Utah Dept. of Transportation also posted a warning on its electronic billboards over the weekend that read “Motorcyclists should be seen not hurt” to remind motorists that crashes like this are 100% preventable.

Legally speaking, there is a wrongful death claim that could be made against the driver of the left-hand turning car. An underinsured insurance claim should also be made on the bike’s insurance policy. 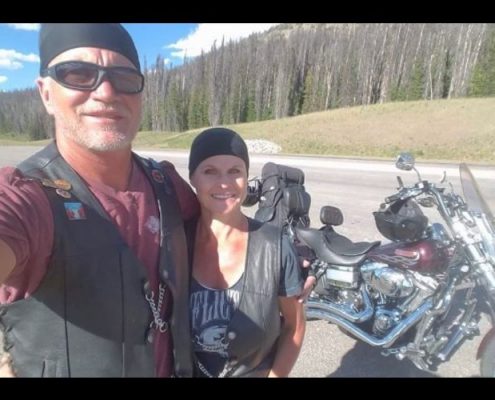