A Greyhound bus traveling westbound on I-70 in Utah rolled over at 11:47 p.m. December 27, 2021. According to Gephardt Daily News, the bus trip originated out of Green River, Utah and was heading to Las Vegas. At or around mile marker 112, the bus carrying 37 passengers and a driver veered off the road and went about 100 yards before it overturned.

Multiple ambulances from Carbon, Emery, Wayne, Sevier and Sanpete Counties in Utah were dispatched to triage the passengers and take them to local hospitals for treatment. By reports, no one perished in the bus rollover, with injuries to passengers ranging from mildly injured to seriously injured.

Local law enforcement took the crash seriously with about 20 officers being sent to the scene for investigation. Non-injured passengers were taken by Emery County deputies to a local church while investigators continued to process the scene.

Legally speaking, Greyhound is liable for injuries suffered by passengers on the bus due to its driver’s negligence. My take is that the bus driver either fell asleep at the wheel or was distracted, causing the bus to leave the road. The error of driving off the road may have been compounded when the driver overcorrected to regain control of the bus. Or the bus may have been on a slope that virtually assured that a rollover would happen.

After a bus accident like this, a number of questions need to be asked, such as: 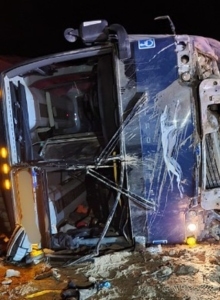 (Utah Department of Public Safety) A Greyhound bus veered off I-70 and crashed, injuring about 20 passengers.

In a similar case I had against Greyhound several years ago, the bus my client was in rolled over as this bus did. In my case, the driver was going too fast on snow-packed roads and lost control. As bus passengers are usually not wear seat belts, when the bus rolled, my client fell to the other side of the bus and injured his back on a metal luggage rack. This caused him a multi-level back injury requiring a multi-level back fusion. Those injured in this bus accident may have suffered similar injuries to their spine.

Those injured in this bus crash may additionally have suffered a brain injury if their head contacted any hard surfaces on the bus or outside of the bus. There could also be orthopedic injuries and broken bones. If these injuries keep injured victims from working or affect their ability to earn a living, there could be vocational or job losses they should be compensated for and they should be very cautious about accepting a quick settlement from Greyhound or its insurance company.

Victims wanting to make claims and/or bring lawsuits against Greyhound should be aware that there is a four-year statute of limitations for filing such a claim in Utah. Alternatively, claims could also be made in Texas, where the bus company has its main office. The statute there is only two years for personal injury claims. Those injured in this crash would do well to consult with a personal injury lawyer before accepting any settlement offer from the bus company.