A former BYU professor has been charged in district court with seven counts of forcible sexual abuse for interactions that happened between 2017 and 2020. According to KSL News, Michael James Clay, 47, the former head of Urban and Regional Planning in the Geography Department at BYU, has been charged with ecclesiastical abuse for his role in sexually abusing several of his former students through the use of manipulative techniques to engender trust and then fear to prevent his victims from reporting him to the authorities.

For example, Clay is alleged to have initiated one-on-one, therapy-like sessions with his students (while at the same time discouraging them from meeting with a licensed therapist) where he would purport to provide them spiritual counseling while asking them highly personal questions of a sexual nature. During these sessions, he is alleged to have embraced the female student and then moved his hands from a hug down to their buttocks where his hands would linger in that area. He would also have these same students sit on his lap. One student reported that he “touched her in places that no professor ever should.” In furtherance of his manipulation, he alleged to have provided these students with “priesthood blessings” and suggested that if they wanted to “feel their Heavenly Father’s love again” they needed to continue to engage in these one-on-one meetings with him and “pledge obedience to him.”

The students interviewed by the police and others that have come forward since initial charges were announced in June of 2020 state that the former professor who left BYU’s employ in April 2020 threatened them with the loss of letters of recommendation, connections with employers and internships if they reported his inappropriate behavior or gave him a negative review. Other students were afraid of refusing him because he was their boss and professor and because he could affect their scholastic progress as he had discretion to help or hinder their progress. One woman said she wanted the interactions to stop but felt she was not brave enough to ask him to stop even though she was “disgusted” by his actions. With another victim, Clay told her that he was inspired by God to be physical with her. This led this woman to believe that she could not say no to him. 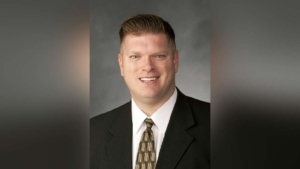 While touching someone’s rear end without permission may not seem like such a serious thing, it does constitute forcible sexual abuse under Utah law and is convictable as a second-degree felony crime which can result in prison time ranging from one year to 15 years.

Forcible sexual abuse happens when another touches someone’s anus, buttocks, or any part of the genitals of another, touches the breast of a female, or takes indecent liberties with someone who is 14 or older without the consent of the victim. The prosecutor is required to show the perpetrator sexual abused his (or her victim) with the purpose of arousing or gratifying themselves or with the intent to cause substantial emotional or bodily pain. See Utah Code 76-5-404.

Legally speaking, although the former professor will be held accountable to the state through the criminal justice system, he and his employer BYU could also be held accountable under civil law for injuries his victims have experienced due to his sexual abuse. For many victims of sexual abuse, these illegal and inappropriate physical intrusions will leave lasting imprints that will be difficult to erase even with the help of qualified mental health therapists and counselors. Sexual abuse is very much a physical injury on a person’s psyche that may never go away and as such, should be compensated for just as someone might be compensated for a broken back from a car crash. The matter is made worse when the abuser was in a position of trust – such as a scout or ecclesiastical leader — and the abuser betrayed that trust. In these circumstances, it may be more difficult for the victim to recover and trust those close to them in their lives for fear of getting hurt or victimized again.

Ron Kramer is a personal injury and sexual assault attorney practicing in West Jordan and throughout Utah.