The Kramer Law Group has filed suit against Prime Snax Corp. for what we allege is intentional exposure of its employees to toxic smoke and carbon monoxide. [CLICK HERE FOR A COPY OF THE LAWSUIT.] According to the Complaint we filed, Prime Snax, who produces smoked meat products like beef jerky, decided one day that it would disable their smoke detectors and use a smoking procedure believed to have involved charcoal or similar substance in an enclosed workspace. (The workers were not allowed to see what it was they were burning.) Its workers, most of whom are Hispanic and don’t speak English, were then exposed throughout the morning to toxic smoke that began to circulate throughout the production area. Although there were fans in the workspace to move the air around, no windows were opened to allow in fresh air or allow the smoke to dissipate. After a while, the masks the workers were wearing due to food handling and Covid-19 protocols, began to turn dark because of the smoke that the workers were breathing. The fire department later came and found there was inadequate ventilation and OSHA opened an investigation.

The lawsuit, filed by two of the workers that were exposed to this toxic smoke, alleges that the 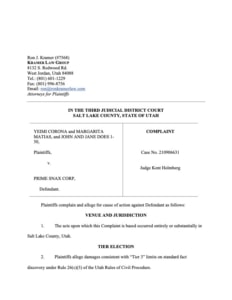 owners and supervisors who ran the company knew or should have known that a smoke inhalation injury was virtually certain to result from smoking meat indoors without adequate ventilation. The suit further alleges that despite numerous complaints from employees that worked that morning, supervisors downplayed the severity of the toxic smoke inhalation and pressured them to continue working in the toxic smoke environment. These two workers-plaintiffs, as well as other employees that were working that morning shift, experienced symptoms related to carbon monoxide poisoning and several of them were seen at local emergency rooms with a few of them requiring hyperbaric oxygen therapy to counteract the exposure they received with some of them being unable to return to full time employment.

Injured employees in these or similar circumstances can establish the required mental state necessary to prevail by showing that the employer’s supervisors or agents acted knowing that injury was almost certain to result. In this case, we allege that because supervisors disabled smoke detectors and pressured its workers to continue to work despite their complaints of feeling sick because of the smoke, that this knowledge or mental state requirement is satisfied.

As part of the lawsuit, the plaintiffs are seeking compensatory damages for past and future medical treatment and “punitive damages for intentional, reckless and outrageous conduct in an amount sufficient to punish the company for its actions and to deter other employers from engaging in like conduct” and are seeking a trial by jury on the allegations made in the lawsuit.