Highway 84 in Morgan County was shut down for several hours following a tractor trailer roll-over. According to GephardtDaily.com, the crash happened near Croydon, Utah, when the driver of the westbound semi tanker lost control of his commercial vehicle. According to UHP representative Lt. Nick Street, the truck left its lane of travel and went on to the right shoulder, where it overturned. The truck was hauling an emulsion substance and started leaking, requiring that Hazmat be deployed to the scene. This was a single-vehicle rollover and the driver is reported to be uninjured. 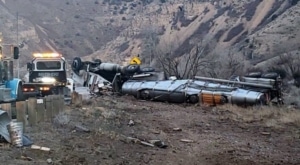 Legally speaking, drivers of tractor trailer rigs should never be driving while fatigued. Through the Federal Motor Carrier Safety Regulations, drivers are strictly regulated as to how many hours of day they can drive and the rest they are required to get to ensure that other motorists – and even property – is not damaged due to a sleepy driver. The article doesn’t give particulars about what caused the driver to be fatigued, but ultimately it is up to both the driver and the company they drive for to make sure the driver is rested before putting a 80,000 pound vehicle on the road.

It could be that the driver has a sleep apnea condition that caused sleep issues and fatigue while driving. Maybe it wasn’t even diagnosed. Sleep deprivation and driving a commercial vehicle are a recipe for disaster should the driver lose control around other motorists.