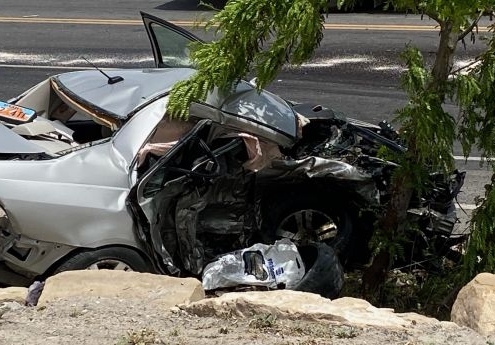 A 16-year-old boy, Ammon Blake, lost his life following a violent crash on Redwood Rd. and Harvest Hills Blvd. in Saratoga Springs, Utah yesterday, May 25, 2021. According to KSL News, a 28-year-old was heading southbound around 2 p.m., and drove into the intersection of Redwood Rd. and Harvest Hills Blvd. against a red light. At the same time, Ammon Blake was in the process of completing a left-hand turn to go west on Harvest Hills when the 28-year-old entered the intersection and broadsided his car. Emergency from Saratoga Springs Fire Dept. worked on the boy for over 45 minutes, but to no avail. The adult driver was also hurt in the crash and is said to be in critical but stable condition.

According to witnesses, the 28-year-old was speeding just prior to the crash and driving erratically. The police say that road rage may be involved in the crash as well, although there are no details on this.

Legally speaking, it is illegal to run a red light. Most people who run a red light, probably over a thousand a day in Utah, don’t hurt themselves or anyone else. They run the risk, however, of causing serious and grave harm to innocent motorists, pedestrians or motorcyclists when they do. And no situation is more fraught with peril than the situation where an innocent party is waiting to make a left-hand turn, thinks the coast is clear, and proceeds to complete their turn only to discover the other driver is running a red light. I hear of multiple cases a year where a motorcyclist or motorist is seriously injured and even killed in this scenario.

Interestingly, the insurance company for the red-light violator will almost always blame the (usually) innocent motorist in causing or contributing to the crash and not accept full responsibility. They might say that the victim motorist is 30% at fault or more because they should have “realized the motorist was going to run a red light and stopped short to avoid the crash.” We have multiple cases like this in our office and the defense is always the same. While motorists are required to keep a proper look out, yield to oncoming traffic and drive with “reasonable care,” they are not mind readers and it’s not always possible to perceive if the other driver is stopping for the red light or not. These are situations where you want to have a lawyer on your side to cut through the defenses and hopefully get the case resolved.

Following a fatal crash such as this one, the family of the deceased have what is called a “wrongful death” claim against the at-fault person. In this situation, the wrongful death heirs, or those entitled to bring such an action, would be the parents. The claim would be made against the negligent/reckless individual who caused the crash. If the person was on the clock, then the employer of the person is potentially on the hook as well. As the loss of a young life is tragic and obviously a substantial loss, I would expect that whatever policy this at-fault person had should be paid over without argument. Following this, the family can proceed with an under-insured claim against their own insurance carrier.

No Case for Man Rear Ended by Police Officer