Today marked the seventh time that a semitruck has rolled over in the past two days. According to KSL News, five of the seven rollovers happened within 12 hours of each other. Amazingly, the UHP is saying that all of these rollovers were preventable.

The first rollover happened yesterday morning around 7 a.m. when a tractor trailer rolled on the I-84 in 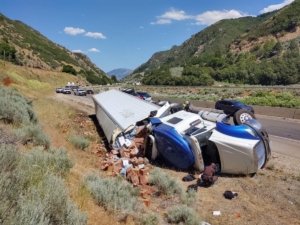 Morgan, Utah. The UHP say that the driver was driving too fast, lost control, went through the center median, and struck a dump truck. See News Release here.

The next semitruck rollover happened several hours later around 1 p.m. when a trailer actually separated from the tractor on northbound I-15 near Sandy, UT. Miraculously, no injuries were reported.

Then, 45 minutes later, another big rig rollover was reported on the eastbound I-80 near Saltair. In this crash, the driver hauling salt dropped his lit cigarette on the floor and horrifyingly attempted to pick it up while his truck was rolling at freeway speeds. This didn’t turn out well for him (I’m assuming
the driver is male – of course he is!) and he flipped his truck on its side, causing lots of traffic delays.

About an hour and a half later, another rollover occurred when a driver hauling beer was traveling too fast in the turn and overturned his truck a mere 16 miles from where the first crash happened that day. The last semitruck rollover of the day happened at 6 p.m. on SR 191, the road connecting Price with Duchesne. In this case, similar to the others above, a driver hauling sod was going too fast in the turn and rolled his truck at what troopers say was a “high rate of speed.” The road was shut down for over an hour as the mess was cleaned up.

UHP has not released the cause of the other two rollovers that happened today.

I’m not sure what’s going on, but we are hearing more and more about semitruck crashes than ever. It could be that the trucking companies are pushing their drivers to deliver their products faster. If this is true, then the companies that employ these drivers will be liable for all the harm that follows. Luckily, we only assume that the drivers were injured, and not the motoring public. However, whenever the driver of a tractor trailer is driving carelessly, he or she puts the motoring public driving alongside them at risk. While we can celebrate that maybe only the drivers were injured, it could have been that one of these rollovers could have also taken someone else’s life.

Five rollovers in one day was so unusual that the Utah Dept. of Public Safety issued a press release. Concerning the rollover involving a trailer detaching from its tractor, the UHP reminded truckers and their companies of the importance of a pre-trip inspection. (It’s during these inspections where all important components of a commercial vehicle are inspected to make sure they are safe and road worthy.) And concerning the cigarette drop case, the UHP advised that the appropriate thing for a driver to do if they drop something in their cab is to immediately slow down and pull over on the shoulder of the road.

“All of these incidents were 100% preventable! UHP would like to remind trucking companies to create safety practices that encourage drivers to avoid feeling like they need to push their semi’s capabilities to its limits in order to meet time constraints on deliveries.”

Legally speaking, when someone is injured due to the carelessness of a trucker or their trucking company, then the company and its driver will be responsible to make up for the harms and losses that flowed from that carelessness. In Utah, there is a four-year statute of limitations to make this sort of claim. However, because evidence can be lost in as little as six months, it is imperative that victims of these types of crashes waste no time in contacting an attorney that can help preserve the evidence that will help them to establish their case.

Ron Kramer is an attorney practicing trucking and personal injury law in West Jordan and throughout Utah.