Most of the calls we get complaining of sexual harassment are happening in the food industry. It’s no surprise then that Del Taco (full disclosure: I worked for Del Taco while in my early 20’s and enjoyed my time there) is reporting they are settling a lawsuit brought by multiple employees alleging sexual harassment.

Two years ago, the US Equal Employment Opportunity Commission (EEOC) sued Del Taco in the US District Court for the Central District of California alleging Del Taco workers were subject to sexual harassment in the workplace. The EEOC usually gets involved only in cases they feel they will prevail on. In other words, they don’t frequently get involved in low-dollar, more speculative claims. So they must have felt like this would be a strong case for them.

In this case, multiple Del Taco employees alleged they were sexually harassed and received unwelcome sexual contact from male managers and coworkers. After being sexually harassed, the workers complained to their supervisors, but nothing happened. Instead, Del Taco retaliated against them by cutting their hours or forcing them to resign because of continued harassment, according to the allegations. After battling it out for a couple years, Del Taco agreed to settle these claims.

The settlement of $1.25 million will be divided up among the complaint employees and will require that Del Taco clean up its act by making sure that adequate training is provided.

Prior Notice is Crucial

When screening a potential sexual harassment case, I first want to know if the company knew or should have known of the harassment. If they knew about it and allowed it to continue or persist, they are more likely to be on the hook for damages. If they didn’t know about it, they will likely attempt to throw the perpetrator under the bus and say that he or she went rogue and they had no knowledge of their shenanigans. They will further argue that as soon as they found out what the creeper was up to, they disciplined or terminated them. Prior notice involving the same perpetrator is therefore critical to show that the company failed to reasonably respond to other allegations involving this person.

The Harassment Need to be “Sufficiently Severe or Pervasive.” 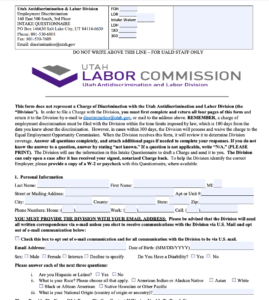 If you feel like you have been sexually harassed by a supervisor or co-worker where there are 15 or more employees, you should report this to your manager or human resources specialist. You can also report this to the Utah Labor Commission. Click HERE for more information on doing this.

Be warned that the EEOC or labor commission will analyze the case to see if the conduct essentially amounts to sexual assault or abuse. The legal standard is that the sexual harassment needs to be “sufficiently severe or pervasive.” Thus, back rubs, brushing up against you, cat calls, mild dirty talk, etc., will probably not be the clear sexual harassment you need to prevail. Pornography in the workplace may also not quite arise to that level. Although less severe harassment is still understandably disturbing, you will likely need to work through these issues with your supervisor or human resource specialist. In our office, I look to see if the conduct amounts to “sexual abuse” per Utah Code 76-5-404, which makes such conduct illegal and prosecutable. That’s the clear like that I’ve established before we can get involved in these cases.

Every case is different though. If you feel you have been sexually harassed or assaulted in the workplace, there are more than 15 employees that work there, the employer knew or should have known of the perpetrator’s actions and the harassment is serious enough, give us a call today for a free consultation.

Ron Kramer is an attorney practicing sexual harassment and assault law in West Jordan and throughout Utah.

How Much is My Trucking Case Worth?