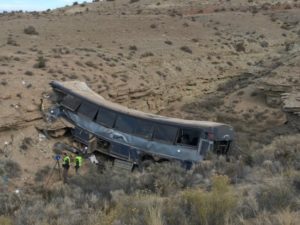 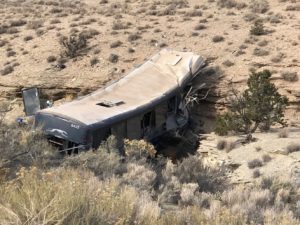 On the last day of the year, 2017, a Greyhound bus traveling between Denver to Las Vegas flew off the road into a steep wash near the Devil’s Canyon view area in Utah, killing teenage passenger Summer Pinzon of Azusa, CA and injuring all 14 passengers aboard. Since that time, the investigation has gotten to the point where investigators with the State Bureau of Investigations are now providing their opinion on why this crash happened in the first place.

As part of the investigation, all passengers aboard the bus were interviewed. According to KSL News, the consensus so far is that the driver had some sort of medical condition which led to him losing control of the bus and it going off the road.

According to a search warrant that investigators unsealed in 7th District Court, one of the passengers was sitting directly behind the driver when this all went down. The person reported that they witnessed the driver coughing severely before he appeared to pass out behind the wheel and slump over it. The bus at that time swerved off the road to the right, just before it crashed into the wash.

Another passenger who provided an affidavit told how the driver had been “complaining of illness and not feeling well.” The driver had earlier told this person:

[Was this guy being pressured to drive?]

Another passenger reported that the driver had fallen asleep earlier and that he actually had to be awoken by the passengers! The investigating officer concluded that “based on passengers’ testimony to investigators, your affiant believes the driver/operator may have not been physically/medically well enough to safely operate the passenger bus yet chose to continue in its operation.”

As part of their investigation, officers also recovered a bag on the front windshield that had a package of cold medicine in it. The KSL article says that the UHP is saying that an official determination has yet to be made.

While we wait for the UHP to provide their determination, I’ll go ahead and provide my opinion based on the news I have seen covering this story. My opinion is this: that Greyhound was negligent in the training and supervision of this driver and possibly even hiring him.

First, Greyhound should have provided training to its drivers that they should not be driving when they are feeling under the weather or have a medical condition that compromises safe driving. Assuming that they have such a policy, Greyhound was negligent in not properly supervising its driver to make sure he was in good health before he started out. The bus ride originated in Denver. This an 8-9 hour drive from where the crash happened. Presumably the driver’s supervisor, or even dispatch, would have had an opportunity to observe the driver through appearance and audibly to see if he was fit to drive. Further, radio communication likely happened after the bus left the depot in Denver with additional opportunities for his supervisor or dispatch to size up the condition of the driver. Moreover, since Greyhound buses are fitted with GPS, the technology exists to track variances in speed to see if the driver is “all there.” If the driver had nodded off, as was reported, you would expect this would correlate with a loss in speed or even acceleration due to a change in pressure on the gas pedal. Further, with video cameras on the bus, you would expect that this would be yet an additional way to observe how things are going on this bus and take corrective action if necessary. Finally, his comment that he is “here but not really here” suggests that he felt he had no choice but to show up for his driving assignment. If he was pressured to drive, even when he reported that he felt under the weather, that is an additional point of negligence I would put on the company.

Bottom line, this driver should have been at home with the covers pulled up to his chin rather than putting life and limb in jeopardy by driving this bus 13+ hours in his then current condition. Even though Greyhound is a discount travel provider, passengers still have the expectation that the bus company will hire qualified drivers who are trained to take a time out and not drive when in poor health. And in the event they do, that Greyhound would have policies in place to catch the driver who insisted on driving.

Legally speaking, everyone who was injured on this bus has a claim against Greyhound for their injuries that came about because of the company’s and the driver’s negligence. There is no insurance policy cap that should restrict the amount any one claimant can make. In this sense, Greyhound is “self-insured” and has sufficient assets to make good on the claims that will come from this bus crash. Beware, though, of tricks the bus company might pull on unsuspecting passengers to pour cold water on those making claims. See: https://kramerlawgroup.org/bus-accident-lawyers/

Ron Kramer is a personal injury attorney licensed in Utah with experience in trucking and bus crash cases.

What is Black Ice and Why Is It So Dangerous?

What is Sexual Harassment?
Scroll to top Call Now Button