The large group ride is called the “999 Ride.” According to the group’s Facebook page, the 999 Ride refers to the fact that the group meets up on Thursdays at 9 p.m. at 900 East and 900 South in Salt Lake City for an informal, weekly ride. It is not clear who the group leader is, but the Facebook page does have information about safe cycling on it, including precautions to take at railroad tracts.

On this particular evening ride, July 19, 2018, the group, totaling “hundreds of cyclists,” were riding down 900 South to the railroad tracks at 600 west around 11:15 at night. A video camera installed at the crossing area shows what happened next as the group approached it. The video first shows the group waiting for a freight train to finish passing through the crossing. The video shows that once the final car passed that bikers, who were positioned on the WRONG side of the road (where there was no crossing arm), started crossing over the tracks while the arm on the right side was down and the lights and bells were still ringing. Many of these cyclists crossing over the tracks appeared to lack basic safety equipment, such as a helmet and lights on their bikes.

Around 20 seconds after the freight car had passed, the lights and bells start up again to warn of an approaching FrontRunner train. Despite these warnings, however, cyclists in the 999 Ride continue to cross over the tracks. One cyclist in the video, who perhaps was rethinking being able to cross three sets of tracks, turned around and went back to a place of safety. The video then shows the deceased, Cameron Hoover, crossing on the left, or opposite side of the road, where there is no arm in place. Perhaps misjudging the speed of the train, he is only able to cross over two sets of tracks before the video mercifully cuts out with him about to collide with the southbound train on the third set of tracks.

A second video provided by UTA shows the crossing from the train engineer’s perspective. In the video, the engineer is heard sounding the horn for 15 seconds before impact. A UTA representative explained that at its speed of 45 mph, the operator was unable to stop in time to avoid collision.

In media interviews, UTA refers to those cyclists who chose to ride over the tracks after lights and alarms were activated as “trespassers.” UTA representatives say they were struck with just how many cyclists were crossing illegally when the warning lights, bells, crossing arms and train horn were activated.

I too am struck by the cyclists’ careless actions in the face of an approaching train. I understand that cyclists sometimes feel invincible when they ride as a group, but the group and its individual members need to follow basic safety rules to help keep everyone safe from the dangers of a moving train.

Legitimate cycling groups stress safety as one of their primary, overriding considerations. Cyclists in groups such as the one I ride with are required to review safety rules and agree to follow them. This is for the cyclist’s safety and well as the safety of the group. In looking at the 999 Ride group’s Facebook page and in reviewing the UTA video as well as an uploaded video of the group on the very night of this tragedy, I see only lip service to safety. 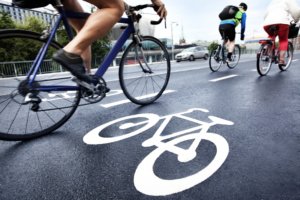 Legally speaking, I see no claim that could be made against UTA. The warnings were there. I do hope that this tragedy inspires this group and its riders clean up their act. This incident is an example of cyclists that are giving other area cyclists a bad name. In reviewing comments left on this story and on the 999 Ride Facebook page, it appears that members of this group will frequently blow red lights en masse, as if they were riders in some big-time bike race with law enforcement waiving them through. Given the mentality that they own the road – even the train tracks — a serious injury or casualty was bound to happen sooner or later. I would advise anyone wanting to ride with this group to be extra vigilant. In other words, Rider Beware!