A tractor trailer hauling a full load of Bud Light and other assorted alcoholic products collided with a pickup truck in early morning hours today (10/10/19), causing it to drop off a 25-foot embankment. According to KSL News, the crash happened around 6:15 a.m., while it was still quite dark. It is still unknown how the collision happened or which driver was the primary cause, but following the collision, the tractor trailer veered toward the side of the road, went over a wall, and smashed into a neighboring LDS church parking lot below, located at 1300 E. 11400 S. in Sandy, Utah. The pickup truck remained at the top of the embankment. The big rig landed on the driver’s door, trapping the driver in his cab. Emergency crews cut open the roof to remove the driver, who is reported to be in serious condition with chest injuries. 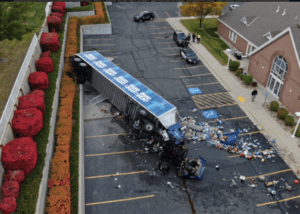 Following the collision, a good Samaritan stopped to assist and injured herself after she fell over the retaining wall after she, assumedly, attempted to render aid. By reports, she twisted her knee and was transported to a local hospital. The driver of the pickup truck was uninjured. Hazmat was called to the scene to help contain the beer that was draining toward the church building; they also helped contain and clean up the toxic diesel fuel that was leaking from both of the truck’s tanks.

Following reports of this completely preventable crash, local commenting readers in the community expressed interest in helping with the cleanup, with several readers generously offering their help and assistance.

Legally speaking, this is a crash that should not have happened. While we don’t know yet whether it was the big rig or pickup truck driver that caused the crash, we know that there is at least one innocent person who was hurt in this mishap. In Utah, a person who negligently causes a collision is liable to all those that come to the rescue. The good Samaritan therefore has a potential claim against the person who is ultimately found to be responsible for this crash.