Although the fatal bus crash happened September 20, 2019, a report was just issued by the National Transportation Safety Board documenting that the bus involved in that crash had mechanical problems. According to KSL News, the bus involved in a crash that took the lives of four Chinese tourists near Bryce Canyon National Park in southern Utah, reportedly had problems with its starter the morning of the fatal bus crash. Per the National Transportation Safety Board, the driver of the bus was reported to have checked in with his boss about the condition of the bus, with his supervisor telling him to crawl under the bus and give the starter “two good hits.” Passengers report seeing the driver under the bus and being worried about the bus’s condition.

The bus crash happened soon after this when the driver lost control, hit a guard rail, and rolled the bus. Of the 30 on board, all were hurt with 17 of the passengers 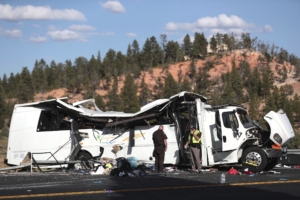 FILE – Authorities work the scene of a tour bus crash near Bryce Canyon National Park on Sept. 20, 2019, in Utah. The tour bus that crashed and killed four Chinese tourists near a national park in Utah in 2019 had problems earlier that day with the engine not starting, according to a new documents released Wednesday, March 31, 2021, by U.S. authorities investigating the incident. (Spenser Heaps/The Deseret News via AP)

receiving serious injuries and nine of them receiving minor injuries. The Report does not provide a link between how a potentially bad starter contributed to the crash, if at all.

Other details included in the Report discuss the hiring of the bus driver. The company, which was based in Southern California and which catered to Asian tourists, had hired the driver soon before the crash, with the driver being with the company for only nine days before being entrusted to drive the bus to Utah. The NTSB investigation revealed the driver stated on his application that he had 2.5 years of experience driving a tour bus for a different tour company.

The investigation additionally revealed the driver’s perspective of how the crash happened. In the Report, the driver reported that the stretch of road where the crash happened was “newly paved.” He said the road felt different than when he had driven it months earlier with his former employer and stated the road felt “slippery.” Yet there had been no precipitation in 24 hours prior to the crash. He described not really steering the bus as it went through this “slippery” area and that the bus tilted back and forth. As it turned out, the road had received a new chip seal a month earlier. The driver, who was tested for illegal substances after the crash, tested negative and was found to be operating the bus under the speed limit. He was still cited for failing to keep his bus in his lane.

Legally speaking, if the bus had known issues with its mechanical systems, it should not have been on the road. The fact that a company supervisor was involved in a substandard “repair” of sorts shows the company was fully aware of the mechanical problem. The bus should not have begun its journey from Los Angeles, or if the company became aware of the problem once it was on the road, a substitute bus should have been brought in. A worn starter reveals that there may have been other issues with the bus as well, although the Report doesn’t document them.

Further, the driver’s description that he didn’t steer the bus is troubling. Commercial drivers, including bus drivers, are required to keep their vehicle under control. And while a driver does not want to “overcorrect” their vehicle, leading to a potential loss of control, they do need to make sure they employ counter measures to keep the vehicle from flipping over. 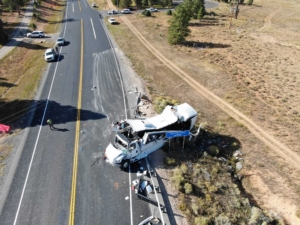 FILE – This photo provided by the Utah Highway Patrol shows a tour bus that crashed near Bryce Canyon National Park in southern Utah on Sept. 20, 2019. The tour bus that crashed and killed four Chinese tourists near a national park in Utah in 2019 had problems earlier that day with the engine not starting, according to a new documents released Wednesday, March 31, 2021, by U.S. authorities investigating the incident. (Utah Highway Patrol via AP, File)

Ron Kramer is a personal injury and commercial vehicle accident lawyer practicing in West Jordan and throughout Utah.