Touted as one of the most significant reforms in workplace history, President Biden just signed into law a bill that will prevent employers from enforcing arbitration agreements many employees are required to sign as a condition of their employment. According to the Washington Post, the law will stymie predators who have benefited from closed-door arbitrations where their shameful sexual exploits are kept confidential and where victims typically have their claims heard by those in the back pocket of the labor industry, resulting in remedies that are less than fair. 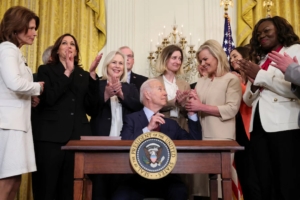 At the bill signing party, President Biden stated and declared that “Between half and three-quarters of all women report that they have faced some form of sexual harassment in the workplace . . . and too often they’re denied a voice and a fair chance to do anything about it. Today, we send a clear and strong message that we stand with you for safety, dignity and for justice.”

Vice President Kamala Harris also stated that forced arbitration silences victims of sexual assault and harassment. “It shields predators instead of holding them accountable and gives corporations a powerful tool to hide abuse and misconduct.” Based on reports, it is believed that at least 60 million Americans are subject to arbitration clauses, with many Americans not knowing they are because these arbitration mandates are buried in the fine print of their employment paperwork.

To be clear, the new law nullifies arbitration agreements only as to claims of sexual harassment and sexual assault in the workplace. It doesn’t change arbitration as to other issues the employee may have. By nullifying arbitration agreements, it allows an employee to bring a claim directly against their employer through the court system, allowing them to seek a jury trial to redress their harms and losses. Federal sexual harassment law under Title VII still applies in many instances, complete with its ultra-short statute of limitations. But this change in the law helps hold those high on the food chain in the company — those with the ability to dig deep in their pockets to pay for the harm they’ve inflicted — accountable for their intentional sexual abuse.

Legally speaking, predators will be shielded no more and their shameful history of hiding behind a piece of paper prepared by enabling company lawyers will come to an end. With this new law, it is now possible to bring a claim directly against business owners, some of whom treat their employees as their personal property, without fear of an arbitration agreement getting in the way. By going public with these claims, empowered victims can help others who are stuck in the shadows of sexual abuse and deter future like conduct by other similarly-minded, predatory employers.

If you feel you have been sexual abused in the workplace by the company owner or high-ranking officer, give us a call today for a FREE consultation to see what your rights may be in your circumstances. Claims alleging sexual abuse against perpetrators are handled on a contingency fee basis, with no attorney fee charged unless we win your case for you. In the meantime, please email me at Ron@ronkramerlaw.com if you have any questions regarding your specific case.

Ron Kramer is a sexual abuse and harassment lawyer practicing law in West Jordan and throughout Utah.